bam! vibrancy in the midst of desolation

sometime last year i somehow stumbled across a blog post somewhere about the salton sea and salvation mountain and i was immediate enamored. i love weird stuff – and these destinations in the middle of the stark, bleak southern california desert are super peculiar and zany. just my cup of tea. i kind of insisted that we make a little detour to see these spots on our drive home from arizona.

i knew i would love salvation mountain, but it wasn’t until we read the story of its creation on the drive that i became obsessed with it. the creator leonard was just bursting with dedication to god. all he could do was build a psychedelicly colored mound out of adobe and straw to show it. leonard lived in the barren, remote desert under the hot blue sky for forty years expressing his dedication to god and jesus with over 100,000 gallons of paint. it’s just this crazy, cool, colorful thing.

we were driving through sand and dirt and dullness and then this showed up – bam!: 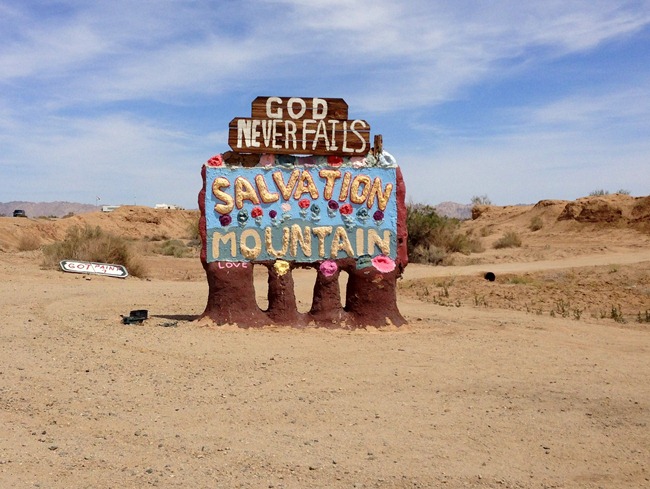 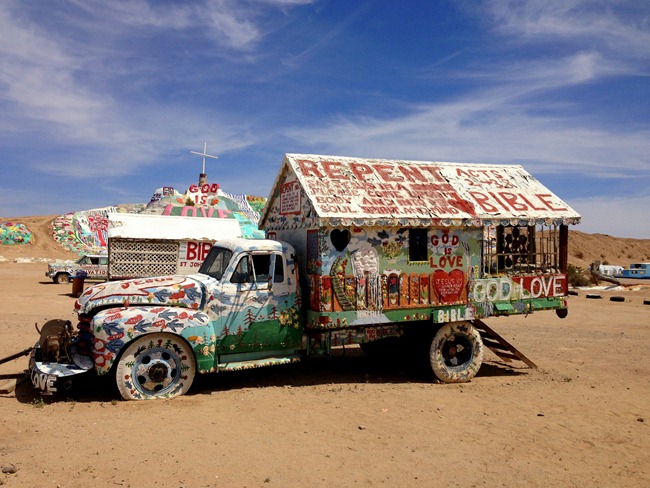 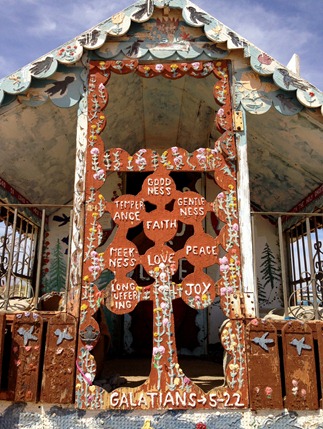 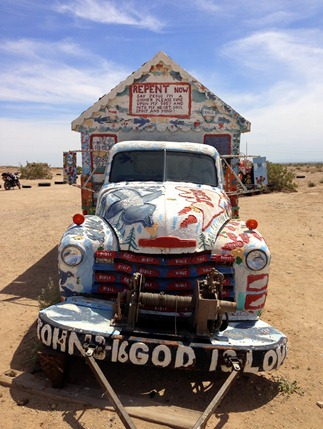 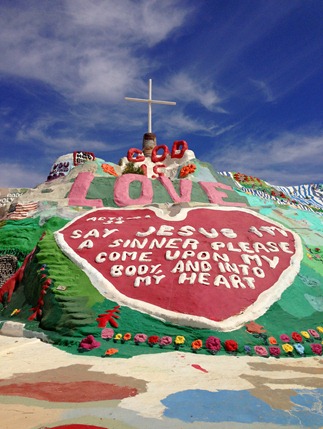 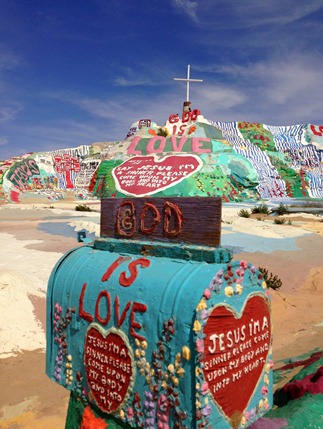 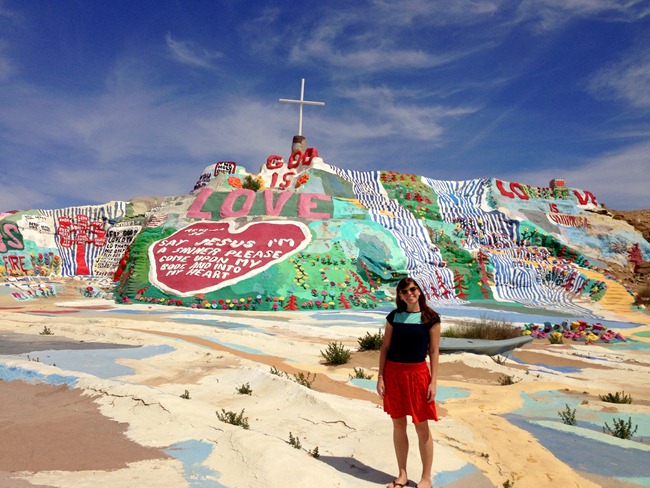 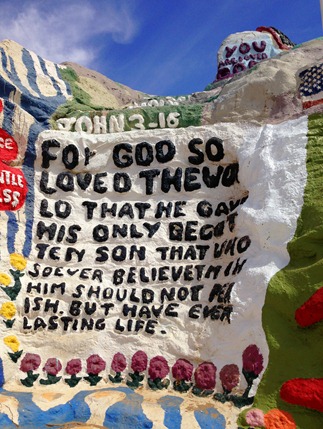 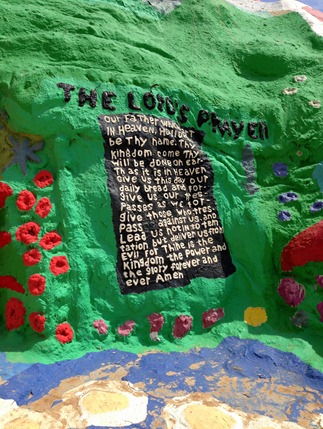 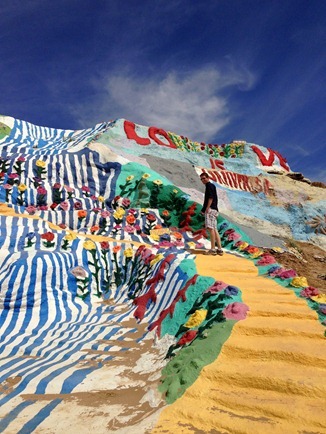 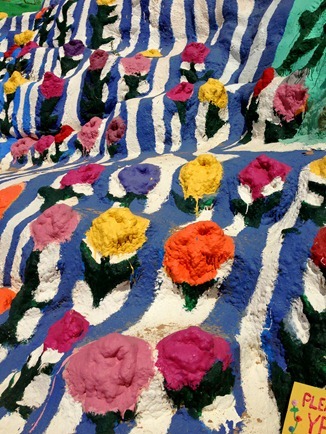 the view from the top reminded us that we were in the middle of nowhere: 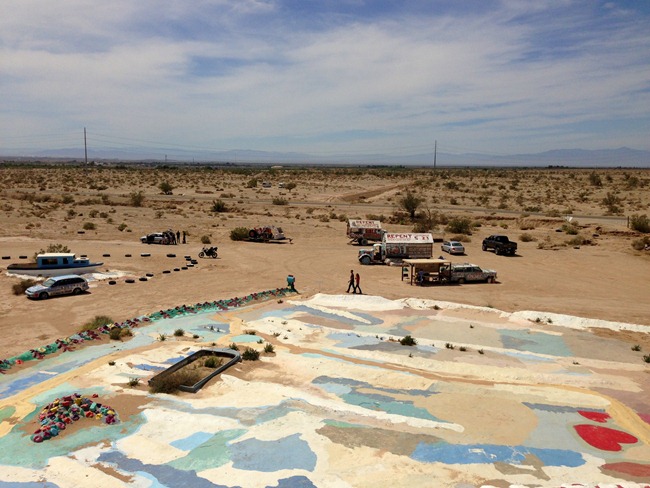 below is the entrance to the addition to the mountain that leonard called “the museum”: 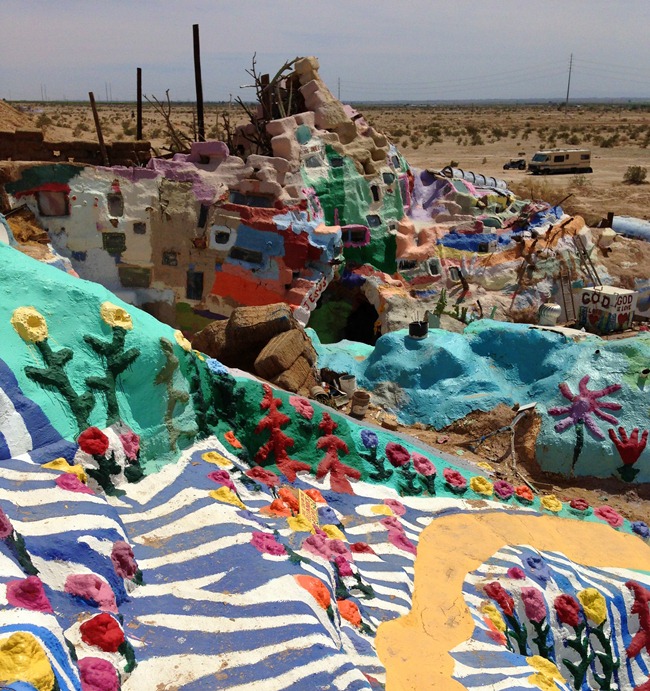 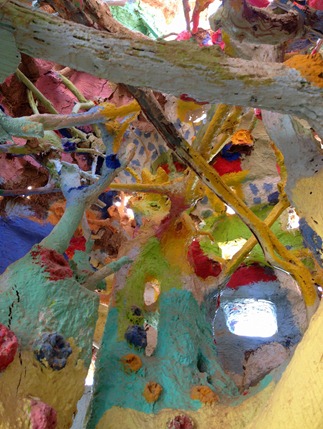 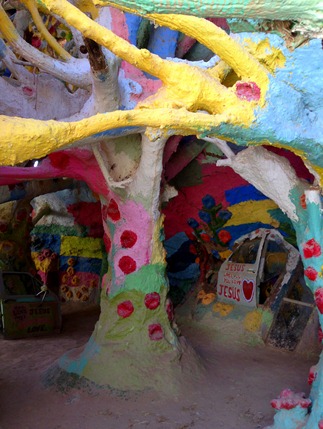 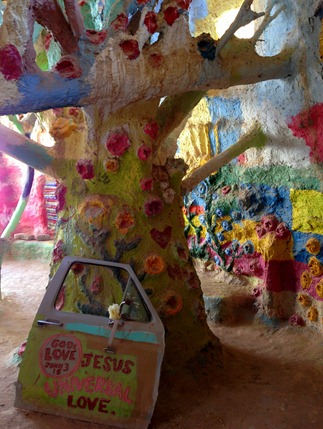 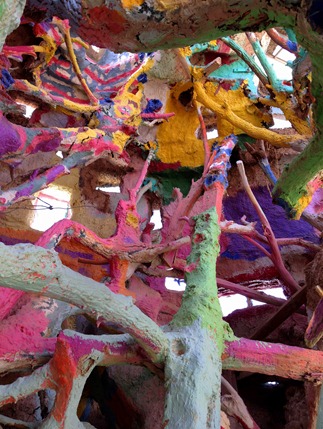 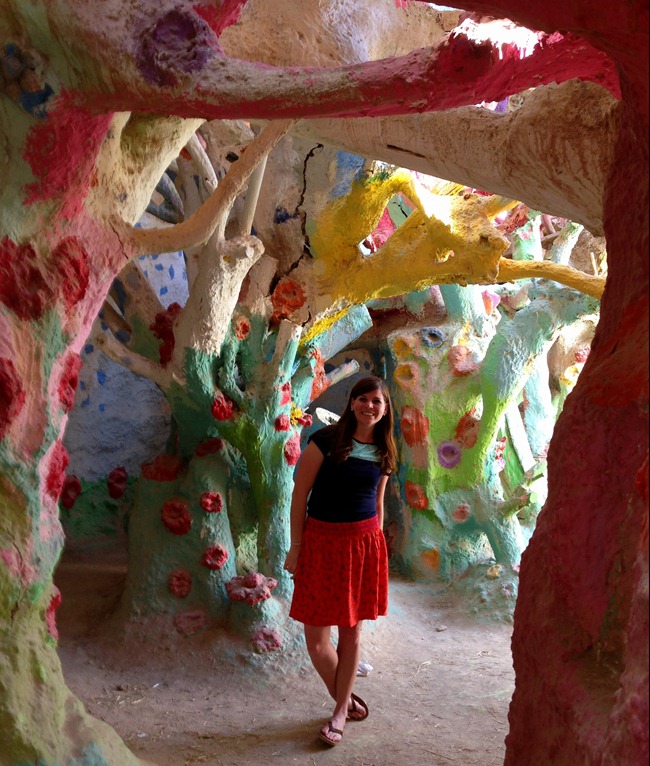 there were also a couple of little chapels on the side: 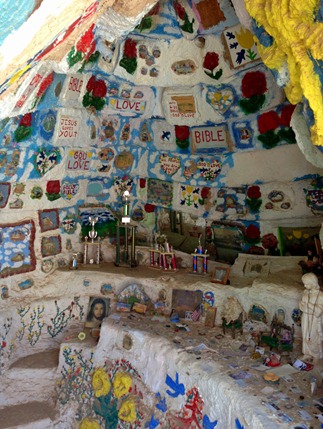 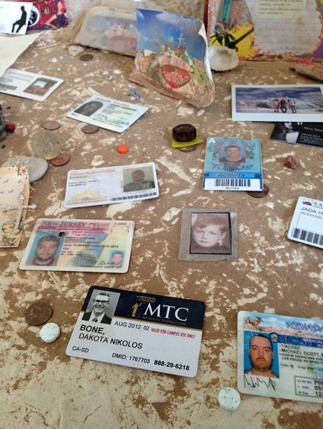 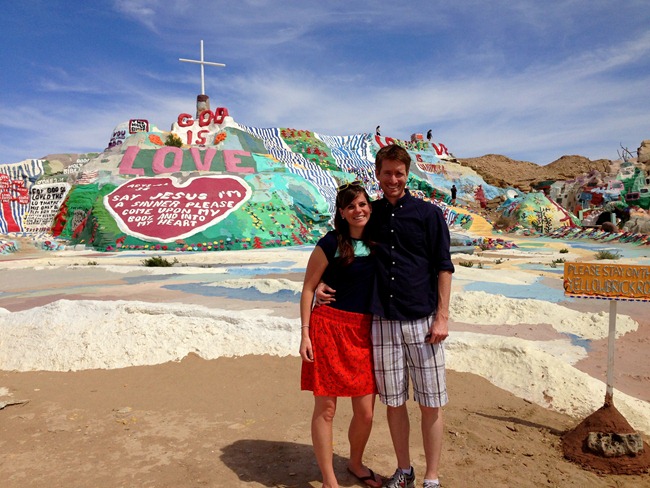 we went and talked to the people who seemed to be in charge. they were scraggly and living out of their truck, watching over the mountain for a little while after a stint in portland and before an excursion to alaska. we asked them about their faith and they said they were driven to that spot by a “faith in the mountain” more than a faith in god. this prompted an interesting discussion between the boy and i about faith and conversion. we concluded that being at salvation mountain was a perfect way to top off easter weekend.

we drove back up to the main highway along the shores of the salton sea. this massive body of water was created after flooding of the colorado river, and it lies 277 feet below sea level and is saltier than the ocean. apparently its lakefront used to house several bustling beach towns, but the unreliable shoreline left them flooded and deserted within a decade or so. the atmosphere around the lake is pretty eerie – abandoned structures and weird smells and trailer parks that just baffle the mind (how do these people live out here??). it’s such a strange place and i loved the bizarreness. we tried to find concentrated ghost towns and then walked out on the fish-carcass-full “beach”. so awesomely weird. it was so quiet and there was a hot breeze. 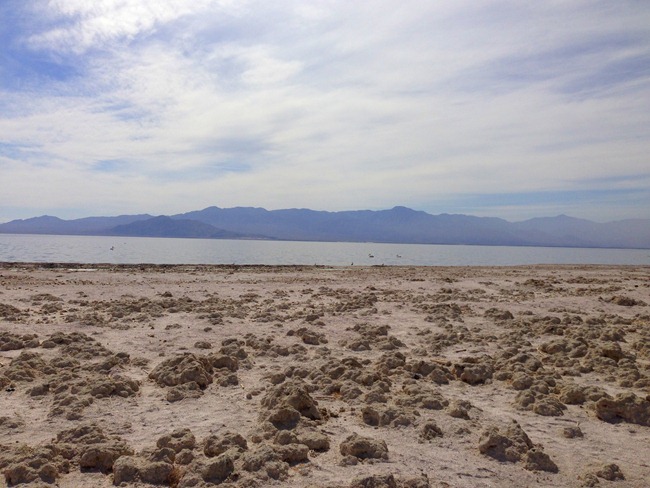 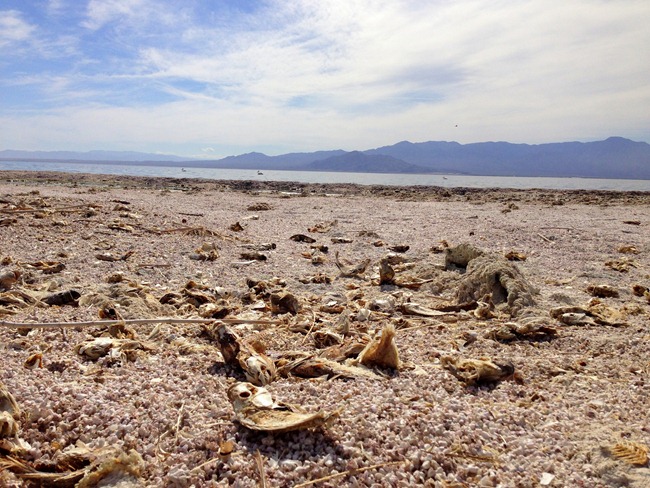 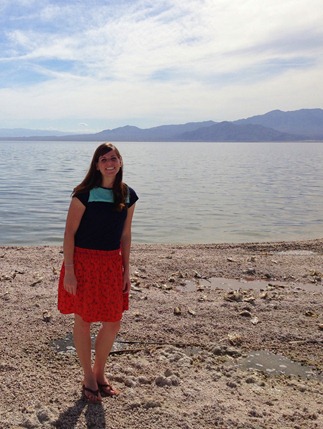 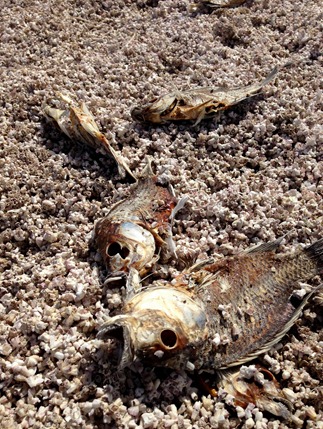 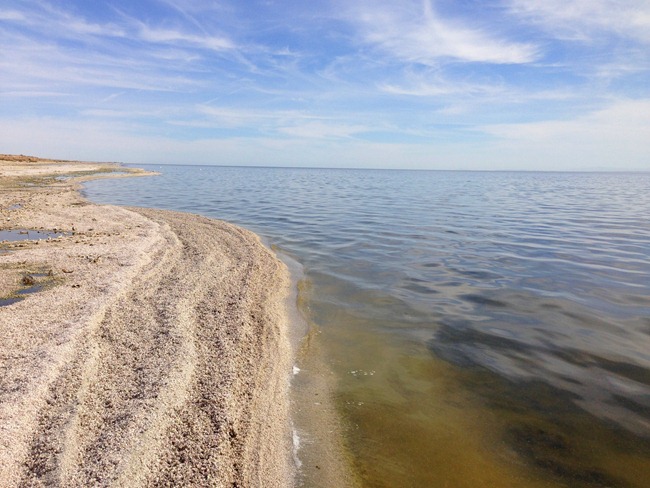 zaniness in the desert. made for a great drive home. you know what else helped? taco bell tacos with dorrito’s cool ranch shells. seriously, have you tried them? maybe we stopped at taco bell for lunch and dinner. mmmmboy.