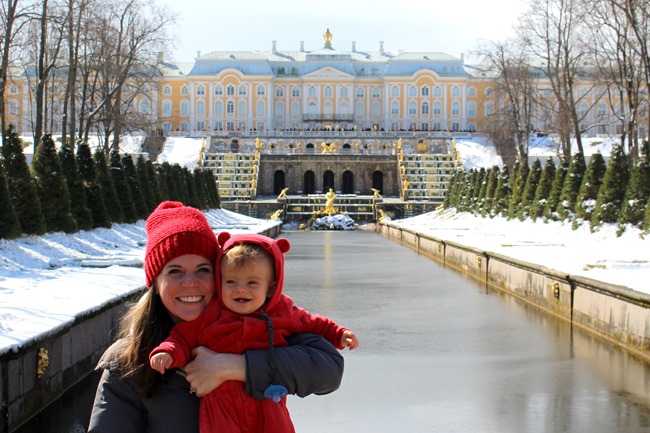 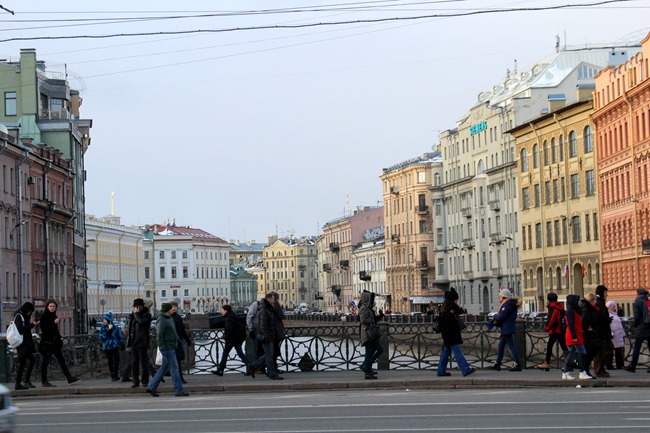 we spent the first half of our last full day in st. petersburg visiting peterhof palace (which is about an hour outside of the city), and the second half exploring a few more colourful corners along the canals.
then, we spent easter sunday having a little egg hunt in our budget hotel room, attending three hours of church meetings in russian, and traveling via train to moscow!
click through to see some photos!
we decided that the theme of our morning at peterhof palace was, “i bet this place is amaaaaaazing in the summer.” ;)
the famous spectacular fountains were not switched on and our walk around the expansive grounds was verrrry chilly and full of snow! nevertheless, we were still pretty blown away by the grandeur and glad we checked this pretty spectacular place out! 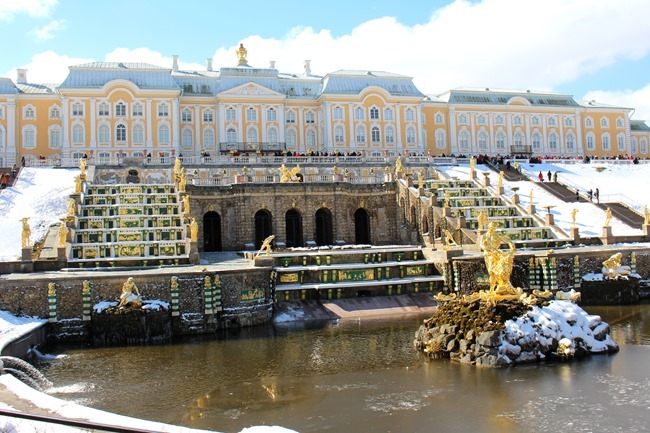 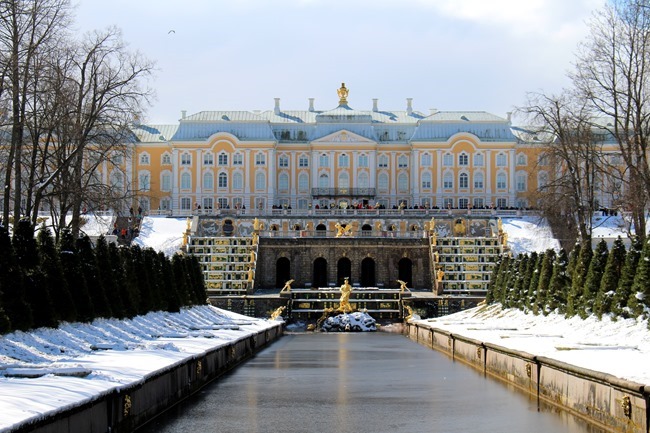 ^^ imagine fountains from each gold statue and all along the waterway. we looked up pictures of peterhof in the summer and did our best to envision it in its full splendor :) ^^ 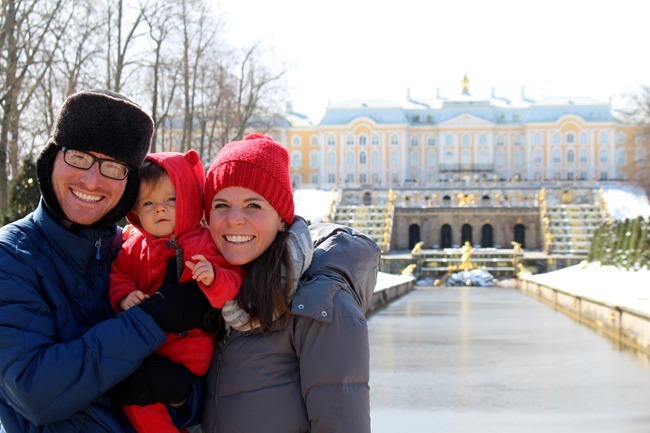 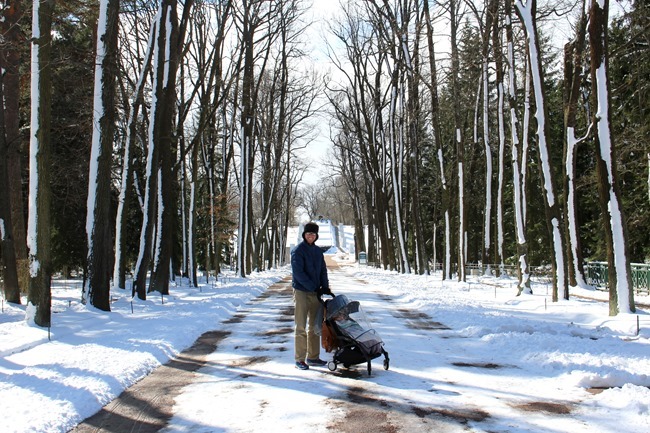 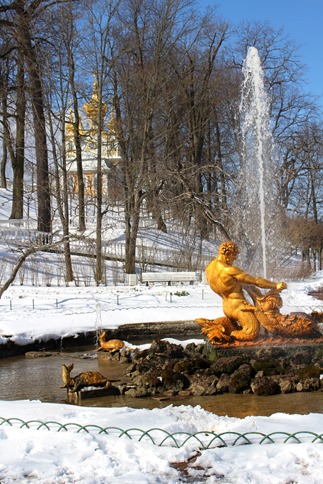 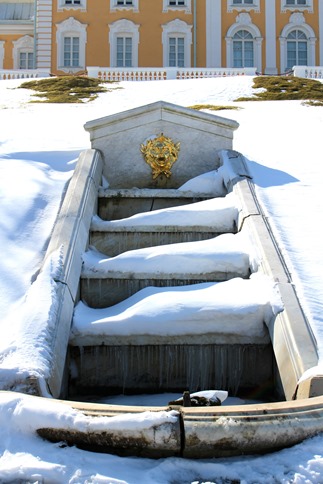 ^^ a few random fountains were turned on as a consolation prize ;) // not these ones right in front of the palace facade though … based on the icicles at the bottom i’m thinking any waterworks would just freeze! ^^ 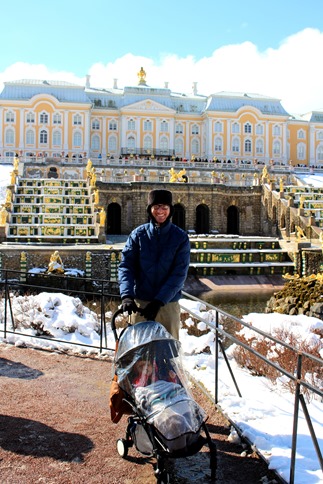 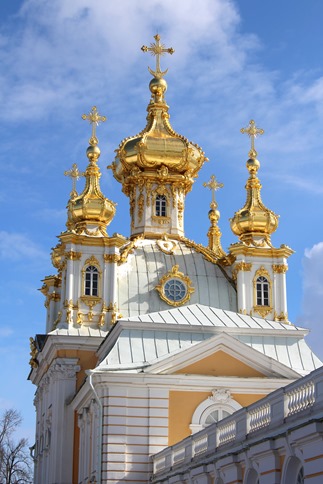 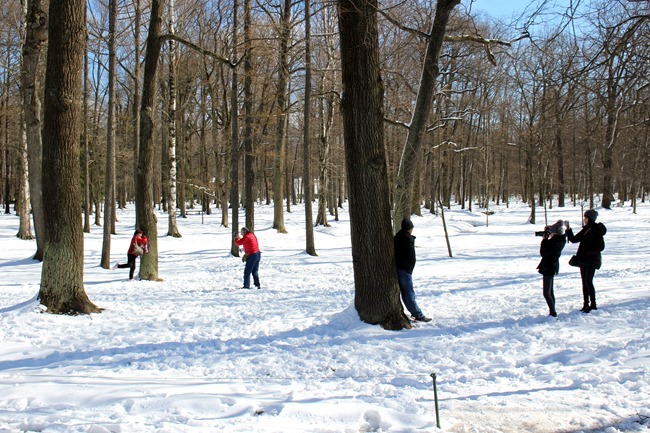 ^^ i love watching people taking photos. (and i bet others giggle watching us t do the same  - i’m sure we are super entertaining in all our picture-taking shenanigans!) these guys posing with the trees were awesome. ^^ 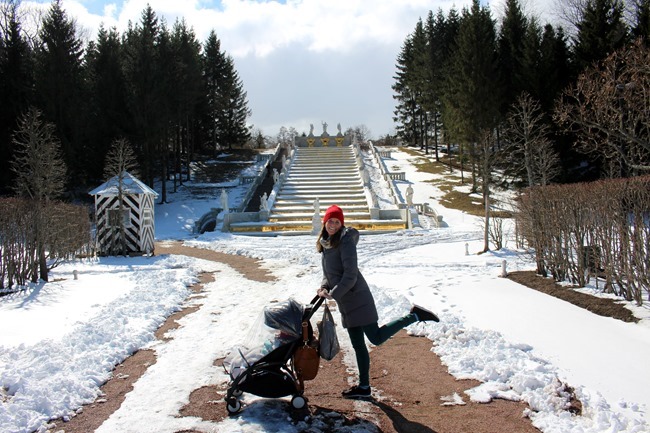 ^^ that structure behind me is a super cool water feature, i promise!! ^^ 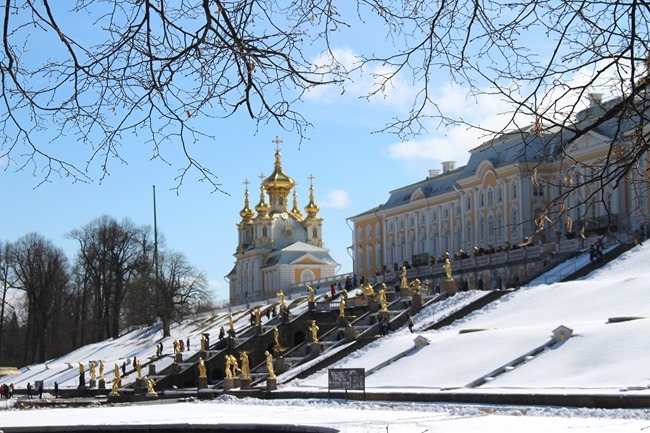 after exploring the grounds we went inside the palace, where we weren’t allowed to take photographs. the interior was sensational. my favourite part was the silk wallpapering – bold, rich, colourful patterns framing the rooms. while we were inside, ian kept saying “no wonder there was a revolution” – opulence that shows massive income inequality is pretty glaring in places like this! 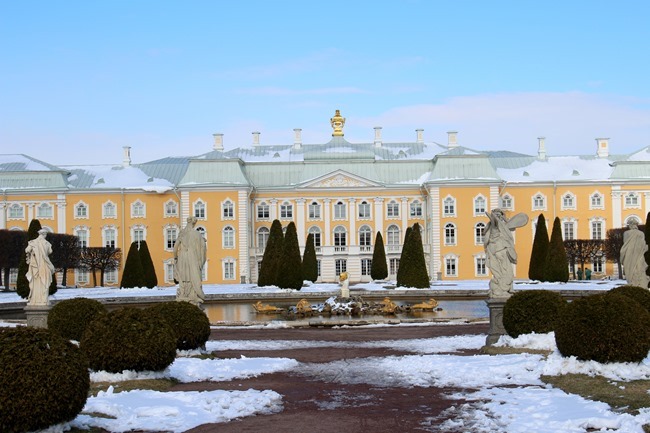 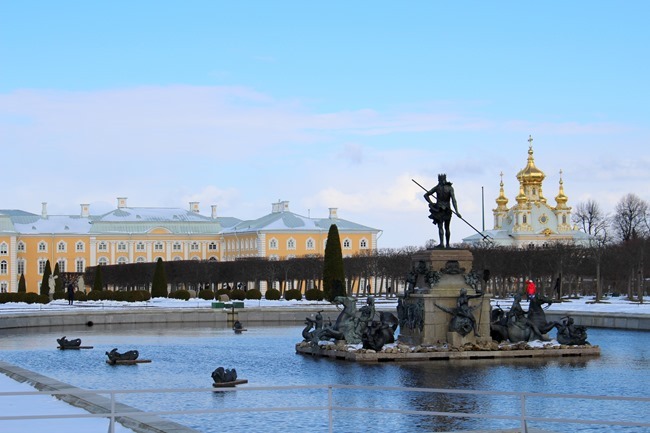 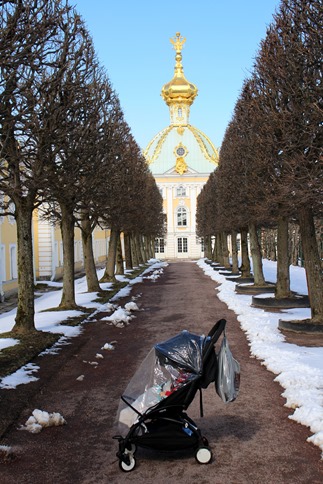 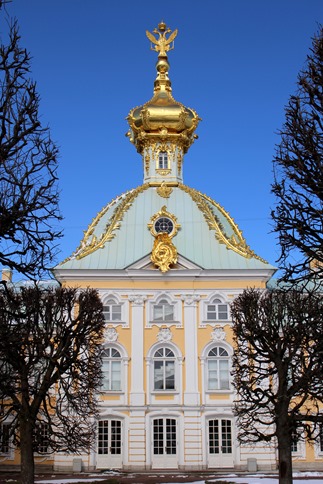 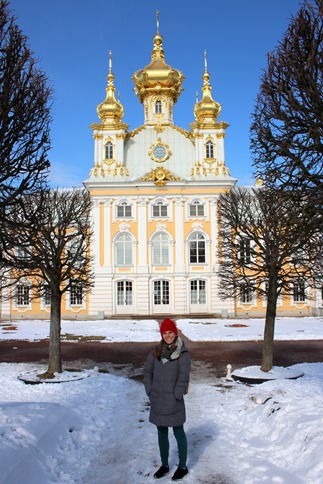 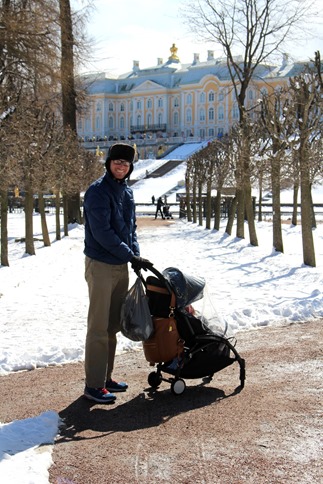 when we got back to central st. petersburg, we ate lunch at the coolest russian restaurant that our friend had recommened. i wish i would have taken some pictures! we both had the beef stroganoff and it was so delicious. i also had a traditional herbal tea that tasted like the nectar of the gods – nothing like a yummy hot drink when you fell chilled right down to your bones! we decided to head towards the faberge museum and then bring moses back to the hotel to have some time to roll around and play. 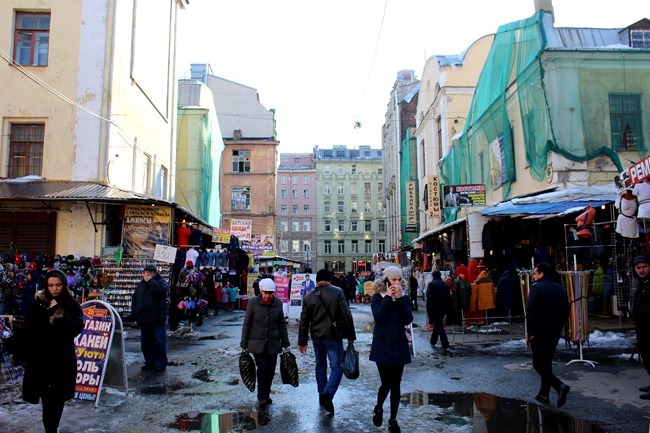 ^^ on our walk from the restaurant, we happened upon a market that clearly was frequented by locals and not tourists. i love finding spots like this that feel like an authentic dose of everyday life in a culture different than my native culture. we enjoyed seeing what was being sold, watching people go about their business, and catching a glimpse of typical st. petersburg living. ^^ 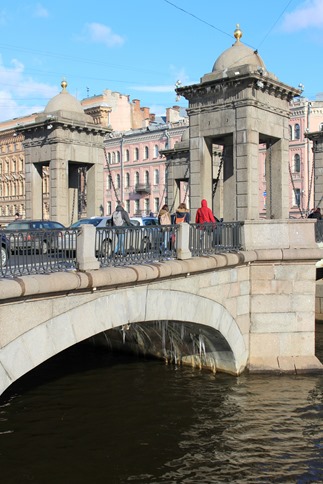 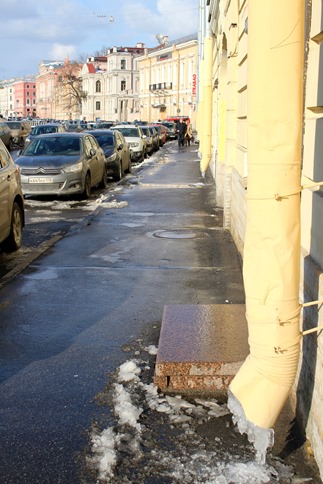 ^^ as we walked, we noticed icicles shooting out from under bridges and drain pipes frozen solid. ^^ 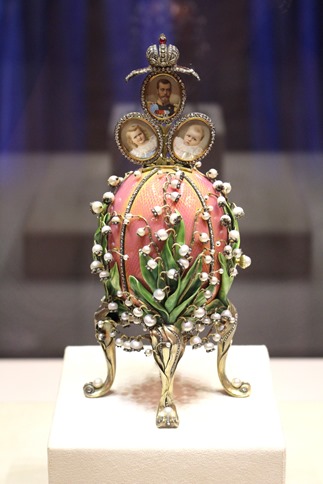 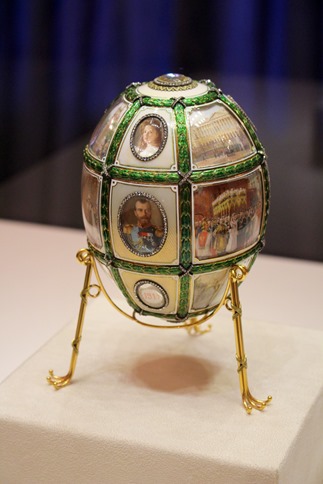 ^^ we stopped by the faberge museum to see some faberge eggs (which i had become fascinated with, and which seemed appropriate given that it was the day before easter!). the museum didn’t allow strollers inside, and moses was asleep in his stroller, so ian stayed with baby boy while i went to see the eggs. they were neat to see, but i liked the ones in the armory at the kremlin in st. petersburg better. still, quite amazing creations! ^^ 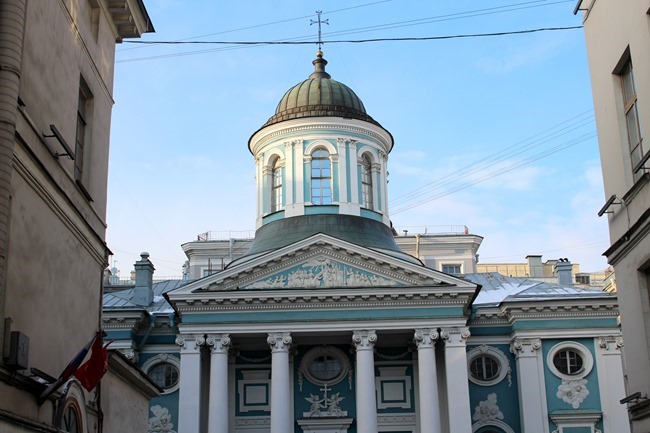 ^^ we popped in this aqua-coloured church on our way back to the hotel because we heard singing. we got to witness the beginning of an eastern orthodox easter service, which was really cool. their easter services start on saturday evening and continue all night long until easter morning. ^^ 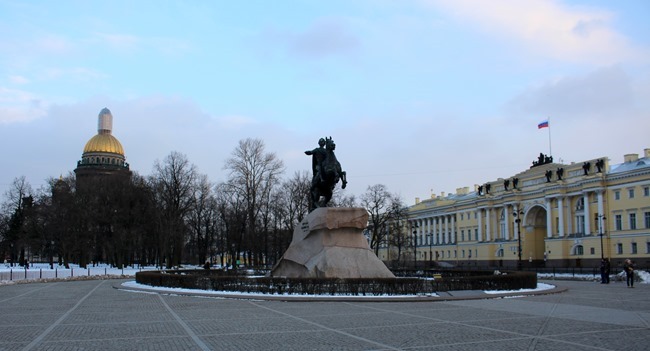 ^^ while moses and i played at the hotel, ian went on a quick solo outing to the riverfront to see this statue of king peter the great (who founded st. petersburg and declared it russia’s capital long ago). ^^ 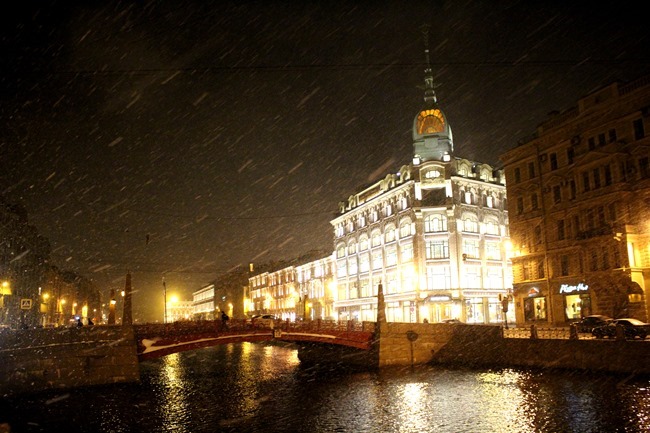 ^^ we had a lovely russian dinner and when we came out of the restaurant, it was snowing again! it was pretty magical with the buildings all lit up, so i walked over to the canal closest to our hotel to try to capture it (failed attempt). ^^

on easter morning, we had a little egg hunt in our hotel room! ian is the best and bought some chocolate eggs on saturday evening and then hid them as soon as moses and i woke up. little mo loved discovering and picking up eggs in funny places, and dropping them into his makeshift easter basket. that twenty minutes of egg hunting was probably my favourite part of our entire trip to russia – haha! we had an adventure finding the meeting place of the church of jesus christ of latter-day saints in st. petersburg but made it to sacrament meeting just a few minutes late and were blessed to have missionaries translate for us throughout church meetings. it is always such a great experience to go to church in new places, and it was wonderful to worship the risen christ with new friends in st. petersburg. 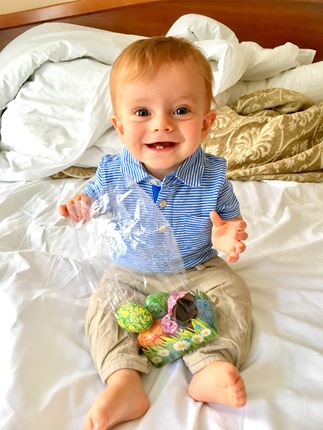 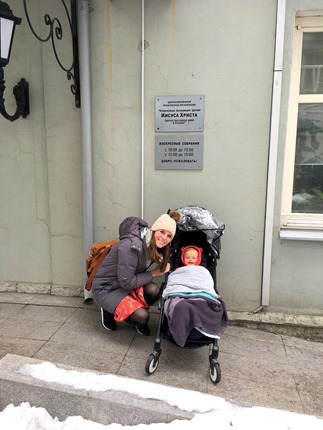 right after church it was time to say goodbye to st. petersburg and hop on a fast train to moscow! 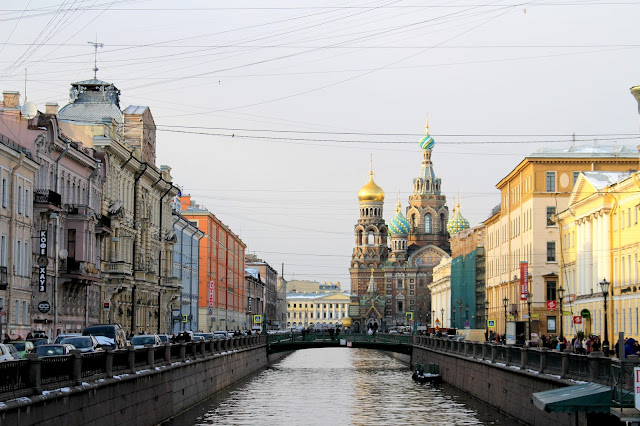