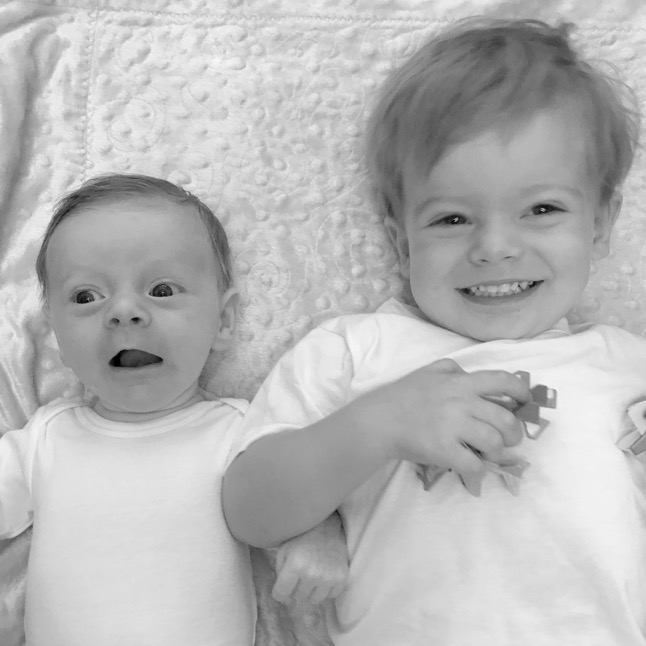 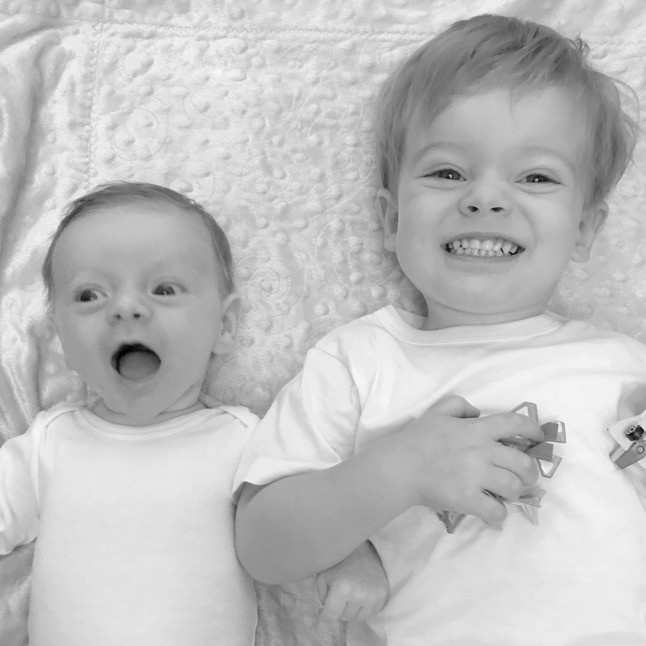 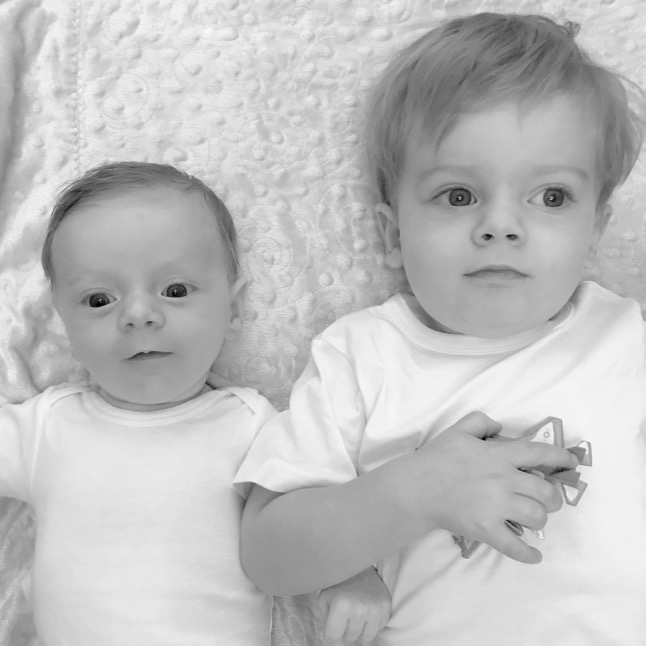 you know what is really hard? getting a good picture of a two month old and an almost two year old together! this morning gabriel was grinning and cooing like crazy and somehow ian convinced moses to lay down next to his brother and smile. mo is cheesing it pretty hard and we didn’t quite capture the peaks of gabe’s smiles in the iphone photos i snapped, but i’ll take what i can get!

gabriel turned two months old yesterday, and moses turns two years old in a couple of weeks! they are both learning and growing and changing so quickly, so i wrote down some tidbits to help us remember the fun stages they are currently in. i genuinely cannot believe how crazy much i love these two little boys! 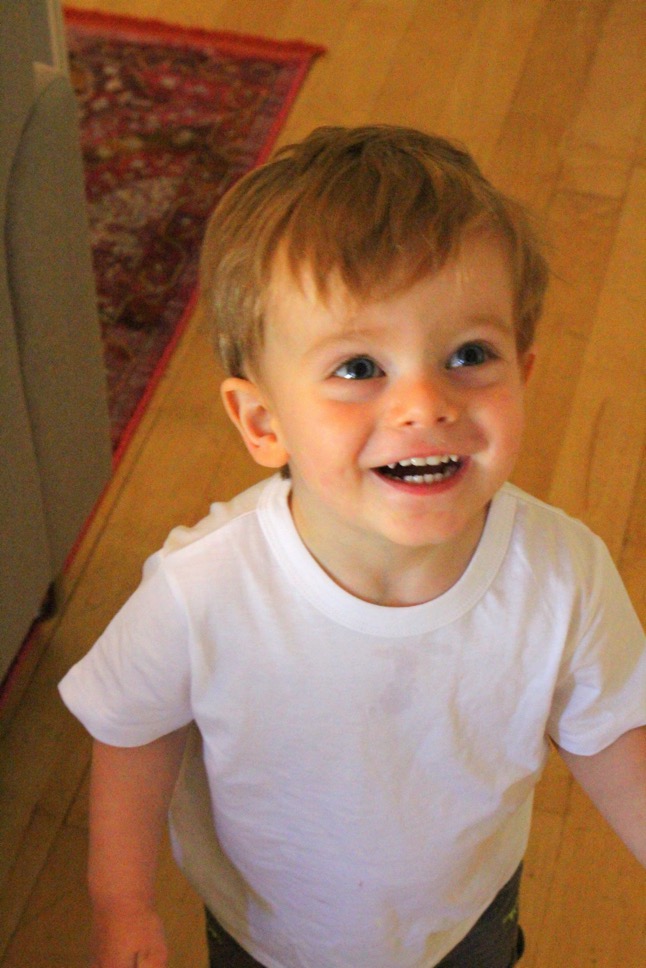 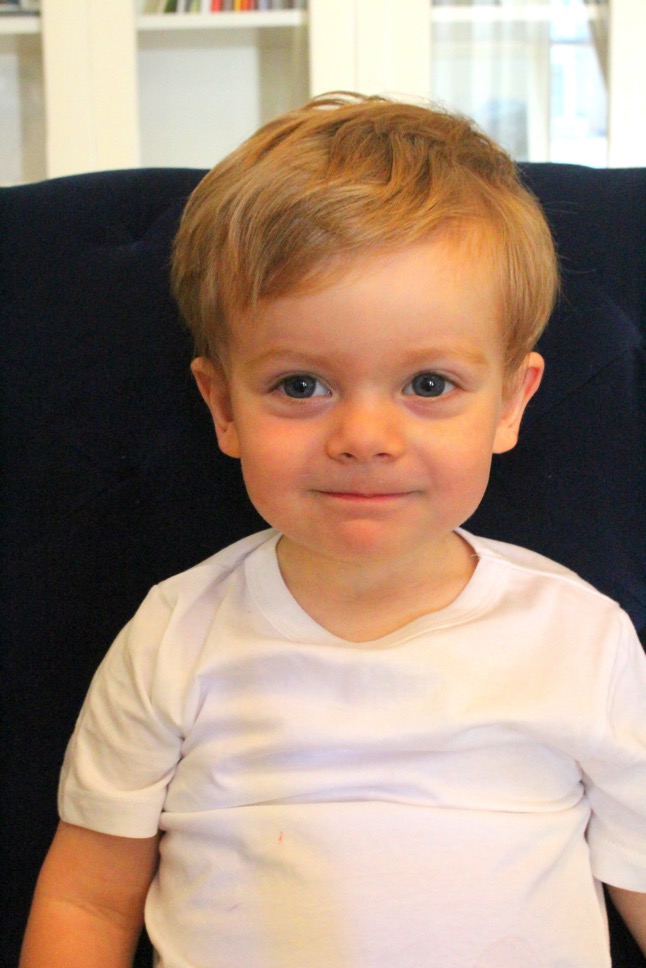 ^^ gone are the days of having a fun little “photo shoot” with moses to get some great pictures of him that capture what he looks like at a certain age. lately moses is just not into posing or smiling for the camera, or even looking at it! he just wants to play and learn and run and explore! these are the best ones i could get this morning! ^^

little mo knows what it means to be silly. he’ll answer questions with some ridiculous response and then chuckle at himself. it’s pretty fun to see him develop a little sense of humor.

moses’s imagination has taken off lately. he is constantly asking me to tell him stories, and as he listens intently - to whatever random narrative i make up on the fly - i can just see the wheels turning in his head. he has some animal busts hanging on the wall of his bedroom and one night ian told him he could imagine them coming to life after he falls asleep. every morning now he is so excited to tell us that the animals came to life while he was snoozing!

he has really started developing some legitimate friendships, which is so sweet to watch. he has begun volunteering things to thank god for in our nightly prayers together, and he sometimes mentions his little pals by name. a few weeks ago we hosted his little “toddler class” and he was sooo pumped to have so many of his buddies in his home. when he woke up from his nap that day, i found him jumping up and down in his crib saying “friends” over and over - just reminiscing on how exciting it was so play with all of them that morning!

mo usually spends one day a week at the children’s centre at ian’s office, and on sundays he spends two hours in nursery with the other toddlers at church. he is sometimes very clingy to mom and dad when we drop him off, but he always ends up having a great time playing with friends and different adults.

moses is learning about physical boundaries and what’s okay when interacting with others. unfortunately, this has resulted in a pushing phase. he just randomly shoves other kids, especially if they are smaller than him. it breaks our hearts! he is such a sweet little boy, so this behavior really does seem totally out of left field. we are working on it. it’s so tricky to help him understand in a clear and sustainable way that pushing is not okay. we’re learning together!

he is also in a “do-it-himself” phase. when he wants to do something on his own he sometimes says, “self,” but more often says, “mo.” and in the past week or so he’s been saying “mo wright” to indicate he wants to try the task without help. when he figures he could use a little adult assistance, he says, “mommy help you.” 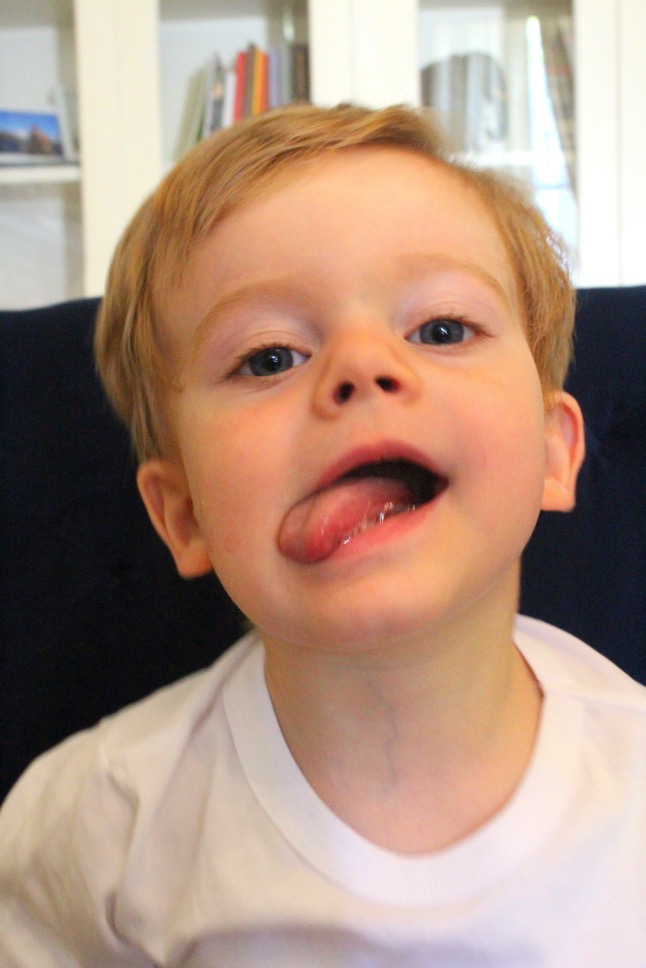 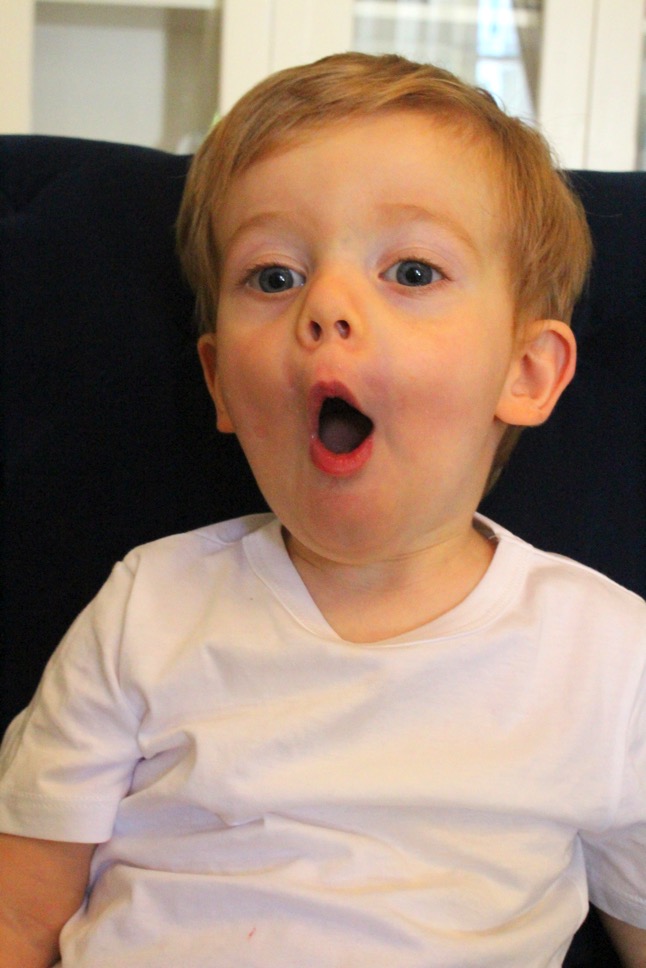 ^^ trying to convince moses to smile for some photos by doing some silly faces first, haha! ^^

moses genuinely loves his brother. he loves to try to make gabriel smile by talking to him in baby talk, saying “gabey, gabriel, gabey” in a singsongy voice. he loves to run to gabriel’s aid - by reinserting the pacifier - when gabriel is crying. gabe definitely has endured a few swats and bonks, but moses is generally very gentle with his baby brother.

little mo is just an explorer. he’s always peering around observing the world, and, when he can, running excitedly to discover a new place.

everyday moses says new words we haven’t heard him say before. often it’s difficult for us to understand what word he is trying to say, and he’ll sometimes really cleverly come up with an alternative way to get across what he’s trying to communicate. he gets very excited when we guess right on what he is saying :) he often wants us to acknowledge what he is saying about five or six times. he’s putting words together more and more. it’s so cool to see his language develop!

it sometimes seems like mo has just two speeds - running full-throttle or walking veeeeerrry slow and stopping to examine tiny details every ten or so seconds ;) 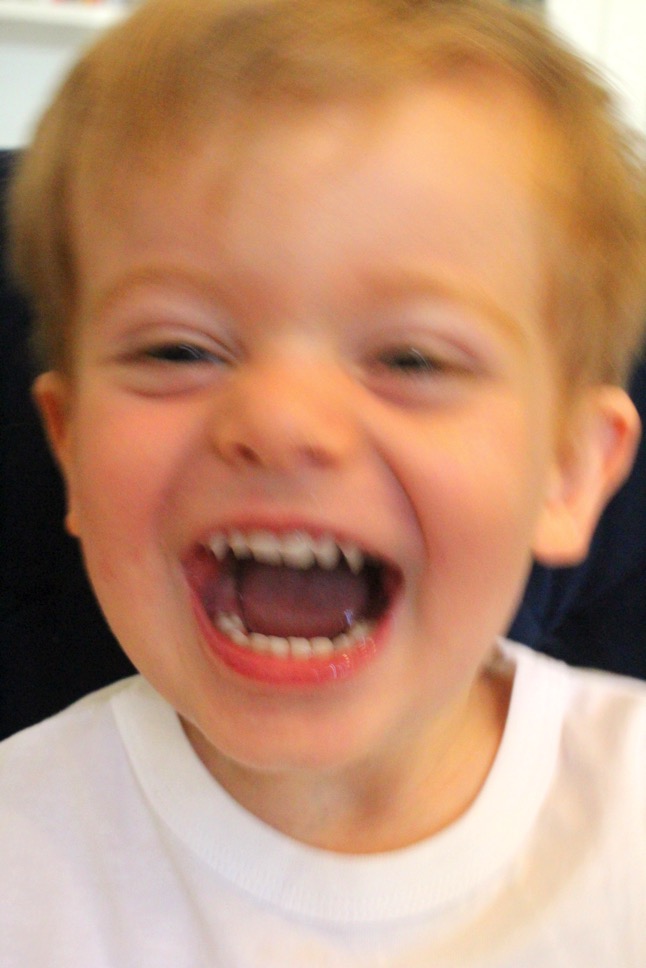 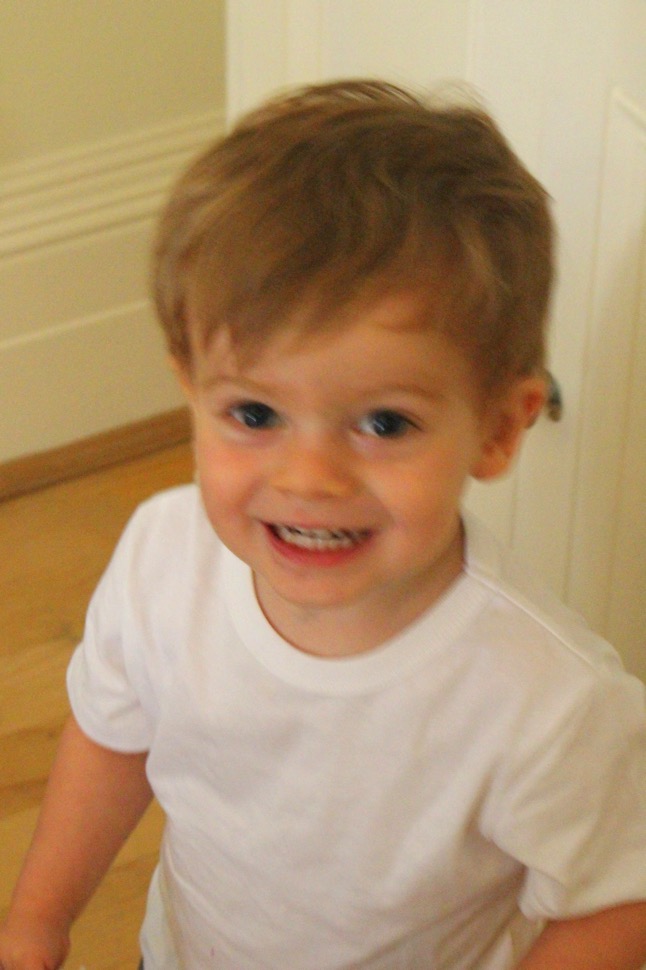 ^^ sitting still is not really an element of moses’s life. most of the pictures i took this morning were blurry like these ones! ^^

he continues to love to dance and adores being chased by (or chasing) mom and dad. occasionally he just feels like running and he will race around the perimeter of our front room seriously thirty times in a row.

moses loves water and sometimes takes two-hour-long baths. now that it’s really warm most days in london, he is often delighted by the splash pads/paddling pools/fountains that we go to play in.

when he wakes up in the morning and after his nap, he usually plays happily in his crib on his own for a good amount of time (up to an hour, plus!). i love that because i’m able to focus on tending to gabriel and/or getting things done around the flat with that precious time. i sometimes think we should buy a fancy video monitor solely for our own entertainment - i’d love to see what mo is up to in there (we just hear him singing or babbling or jumping).

moses has been signing “thank you” since he was a small baby. about a month ago he started signing very emphatically when we asked him to give a big thank you. he would put his hand to his mouth and then swing it away with lots of pizzazz and a big “aaaaaaahwaaa” sound. now he has graduated to saying the words “thank you,” which is sooo cute, but sometimes i miss the enthusiastic signing!

our moses thames brings us so, so much joy! every single day after he goes to bed ian and i talk about the darling/funny/clever things he did that day, and what a cool kid he is. 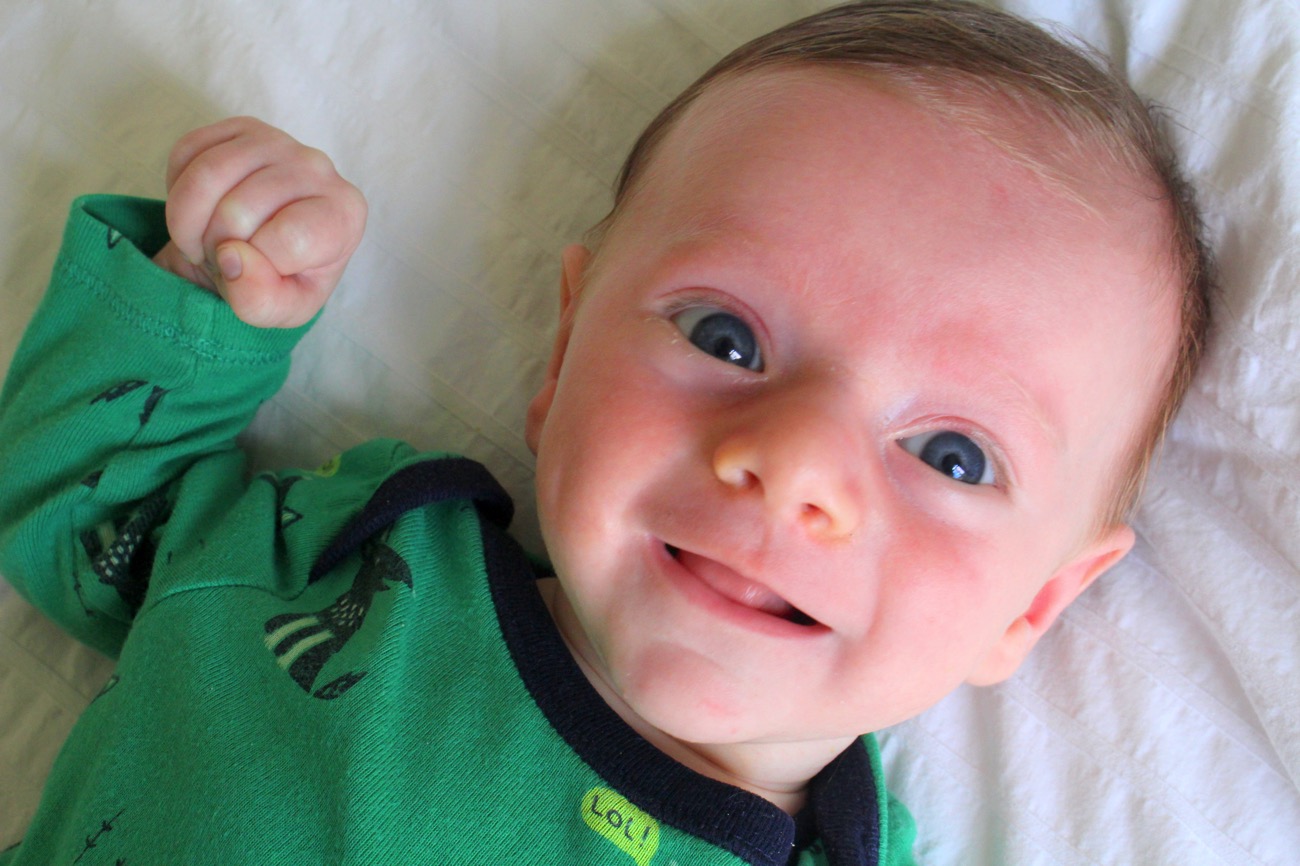 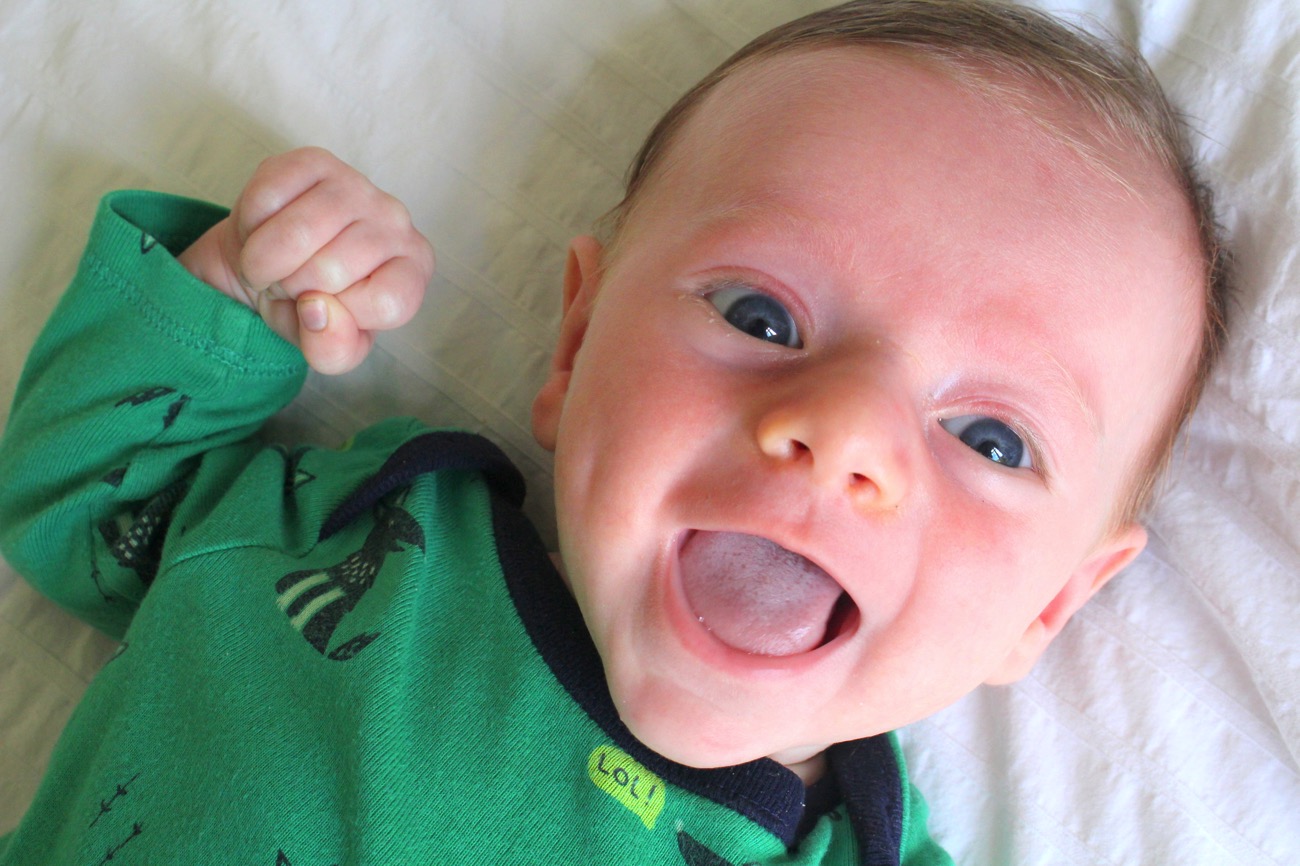 our angel gabriel is a happy baby. he started smiling (non sleepy/gassy smiles) right when he turned six weeks old and there are more grins every day. he is especially cheerful in the mornings and we love watching his expressions as he gets released from his swaddle and stretches his body at the start of each day. he has also started letting out the most adorable coos that just melt our hearts.

he is sleeping well most nights. he wakes for a feed sometime between 3:30 and 5:00 am, and he’s usually very good about going right back to sleep in his moses basket after he’s eaten. occasionally he has a hard time settling back into slumber and so i keep him in the bed with me, snuggling until 7:30 or so. i don’t sleep very soundly when he’s in my arms, but i love the sweetness of his body cuddled up to mine and the feeling of his breath on my skin. 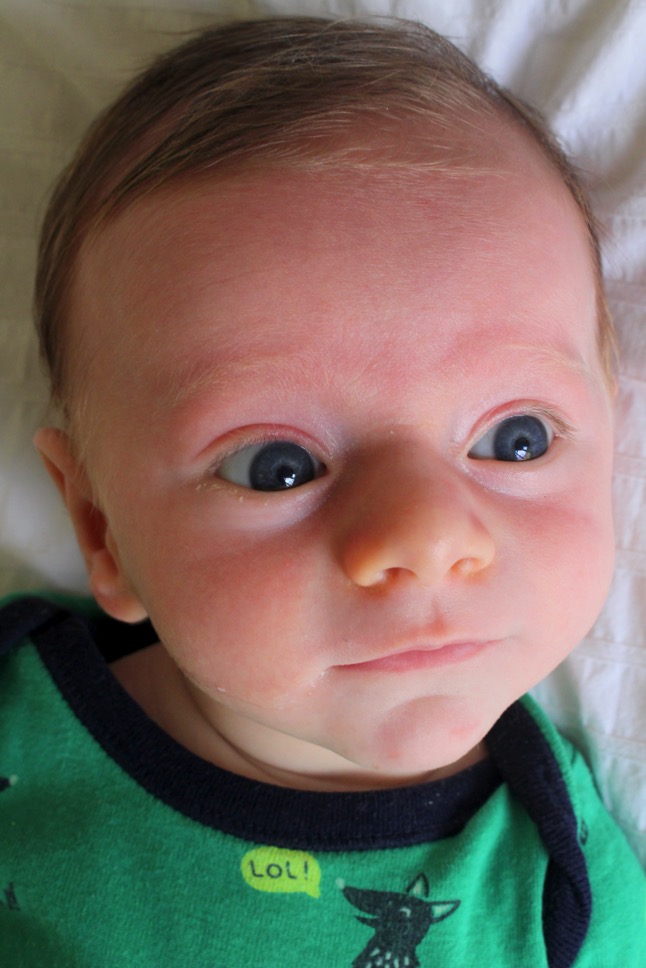 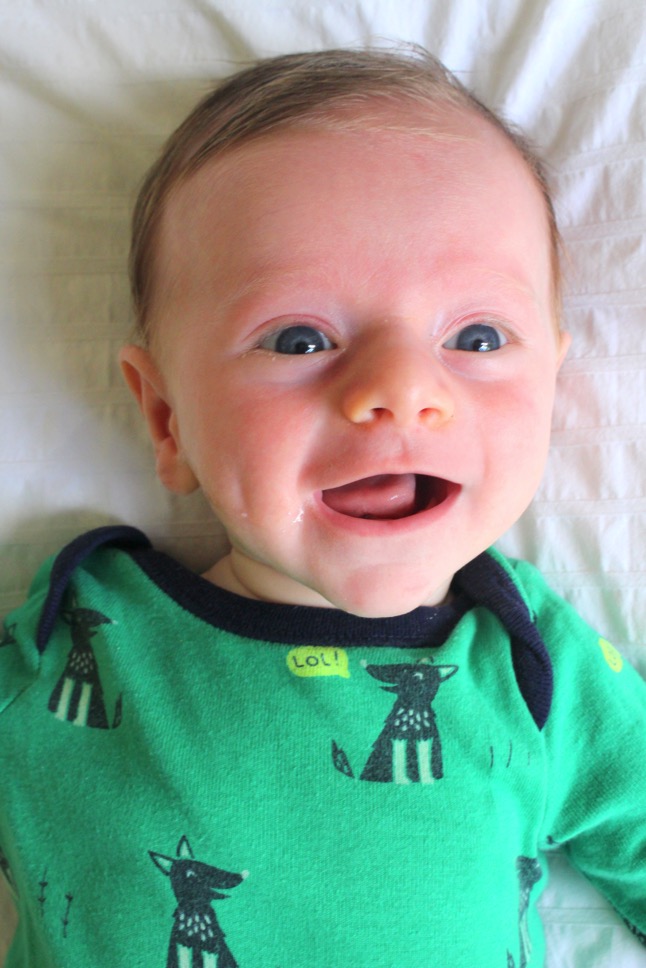 when gabriel was born, our midwives noticed a “sucking blister” on one of his hands - evidence that he had been sucking in the womb. he just came into the world really, really loving the comfort of sucking … and so baby boy loves his pacifier.

gabriel also loves to be swaddled. ian is the swaddle master. he is seriously so good at wrapping babies up in a super tight cocoon that tiny arms cannot break free of!

gabey baby (this nickname was given to him by his brother!) is breastfeeding really well and is definitely growing. i just put away all the newborn clothes the other day (and it broke my heart a little). he has very long limbs and is a tall baby. he has huge eyes that are open wide when they are open. his hair continues to be awesome and attract comments. none of that “highlighted" brunette goodness seems to have fallen out or gotten rubbed off! 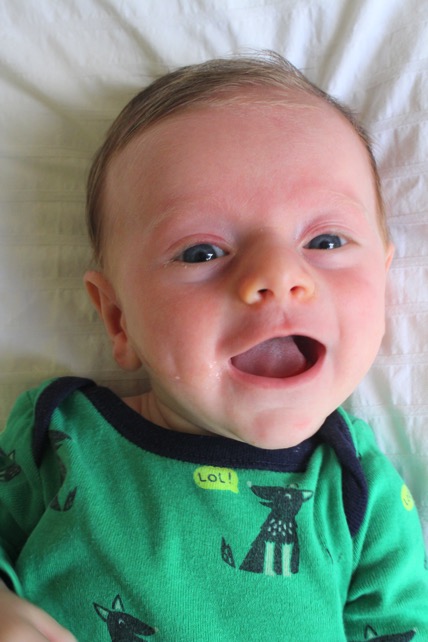 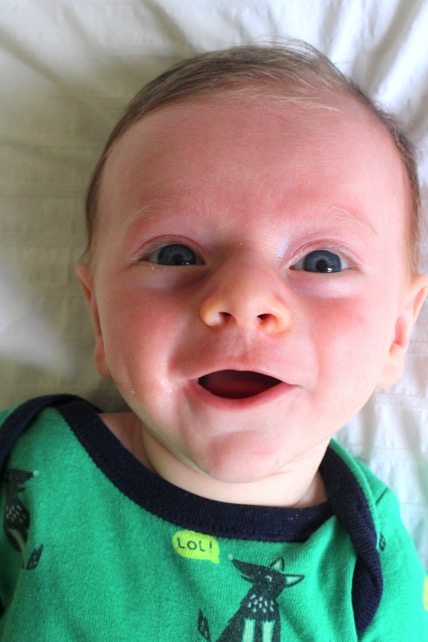 since we don’t have a double stroller (or even a newborn seat for our single stroller), gabriel is always strapped to me when we are out and about. he loves being worn and always seems to be very soothed in the wrap or carrier - it’s basically impossible for him to stay awake in there! the vast majority of his daytime sleeping happens when i am wearing him, and he often snoozes through an entire several-hour outing.

a week after gabe was born, his dad gave him a priesthood blessing. in that blessing, ian said that gabriel would be a “mild child.” i definitely fist pumped with my head bowed and my eyes closed when that was said ;) and our sweet baby has lived up to that blessing. when he is upset, he lets you know - loudly and quickly - but he is generally pretty chill and just rolls with whatever we are doing. his favourite place in the house seems to be mom and dad’s bed. there’s just something about the light from the big window in that room, or the way the light fixture moves shadows on the wall, or the cushiness of the duvet…?

after moses goes to bed between 7 and 8 pm each night, we get to focus on gabriel, and those nighttime hours are so sweet. both ian and i just cannot stand how cute our little baby boy is and we often spend a quarter of an hour just watching him and being enamored by him :) 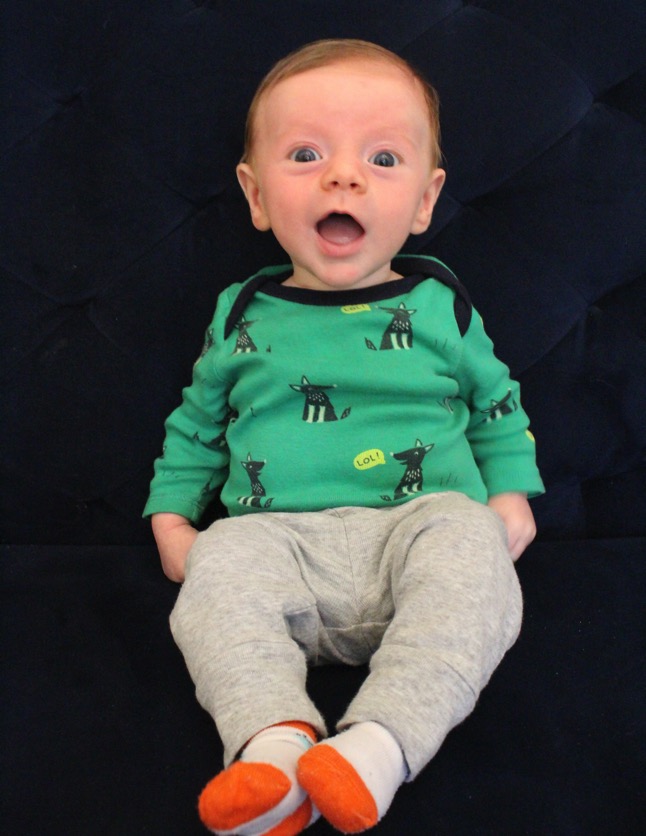 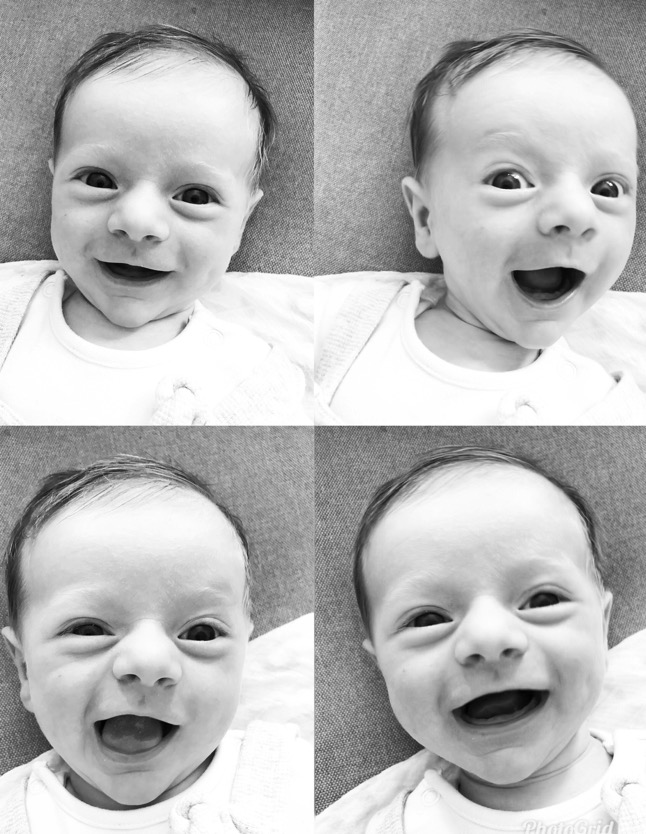 how blessed am i to be mama to these two sweet babies??? i am so lucky to continue to watch them learn and to learn from them. 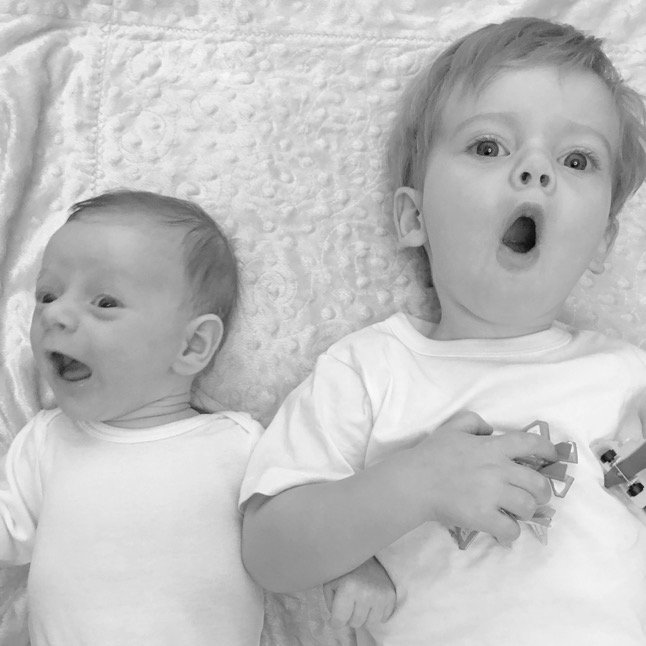 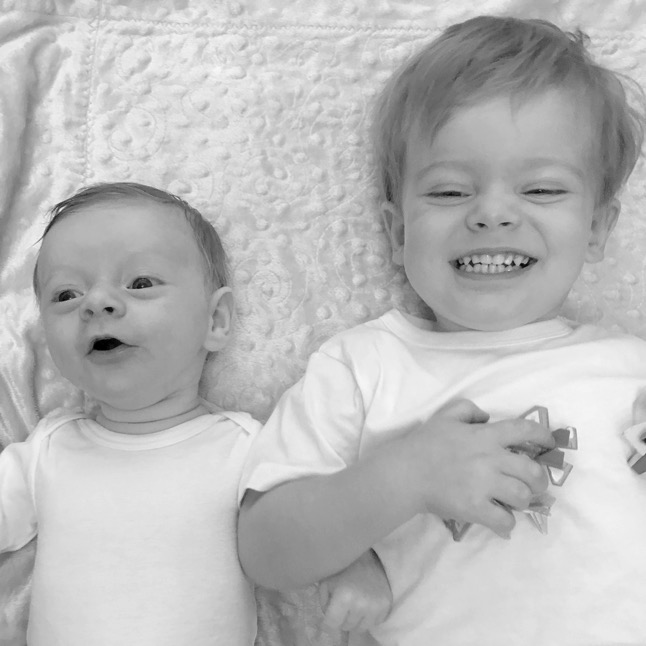