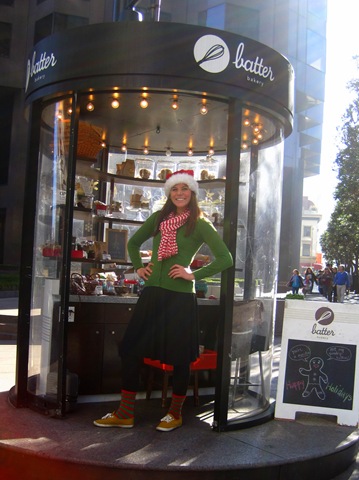 for my last day at work, i got real festive. oh how i loved wishing people happy holidays from under my santa hat! some little kids whispered to their dad outside the kiosk, “look, daddy, there’s an elf!” and he replied, “why, yes, it’s a cookie elf!” my last day as a cookie elf was wonderful. i’m gonna miss that bubble.

i am in utah, which will always always be home sweet home, celebrating with my oldest sister and her family. it is, well, magical. i teared up this morning as my 6 year old nephew read this scripture in his cutest little voice: “for unto us a child is born, unto us a son is given: and the government shall be upon his shoulder: and his name shall be called wonderful, counsellor, the mighty god, the everlasting father, the prince of peace.” with all my heart i believe in and love and adore the babe of bethlehem.

knowest thou the condescension of god?
at the center of human history stands one event.  man reckons time in terms of it; man's destiny depends on it.  foreseen by ancient prophets and remembered by faithful followers, it is the birth of christ.
a thousand years before a thousand years ago a holy night descended on the world.  in the darkness of bethlehem the omnipotent god became an impotent baby.  the hands that made the world and hung the stars in the sky were now just large enough to grasp a mother's finger.  no pillar of fire appeared, but the living tabernacle of god now lay cradled in a manger.  from the moment that the infant jesus gazed up into his mother's eyes, man's imagination was altered forever.   the christmas story reveals in every mother and child a holy mystery.  a vision of the pair at bethlehem hovers like a halo over all mothers and children wherever the christmas story is remembered, and in the weakness of a newborn child men feel the thrill of something beyond their power to understand.
for the adversary of all that is good, the arrival of the world's rightful king marked the beginning of the end.  when the lord of all the earth appeared, throughout the evil realm a shudder passed as the angel spoke: "for unto you is born this day in the city of david a savior, which is christ the lord" (lk. 2:11).  the tiny foot that one day would crush the serpent's head was already nestled in the straw.
the father's likeness had come at last.  did joseph and mary wonder, as they watched the little child, about the humble place of his birth?  what would be said of a god who comes not in glory but in secret, a king who came not to command but to obey?  "i came down from heaven," he later said, "not to do mine own will, but the will of him who sent me" (jn. 6:38).  this was the way of jesus; this was the way of humility.  his way was not to disclose an ideal from afar, but instead to be a servant and companion, a teacher and friend.  he began his life in a stable, that no one should ever feel too lowly to approach him.  he claimed no earthly title that nothing should separate him from those he had come to instruct.  he lived a common life, he spoke of common things.
in the vision of a king born in a stable, attend by the animals and visited by the shepherds, i am led to the ever startling paradoxes that are the essence of the gospel: out of weakness comes strength; out of simplicity, profundity; out of humility, dignity; out of humanity, divinity.  i am freed from the judgments and vanities of the world.  i see the wisdom of its wise men perish before a deeper truth as three gifts are laid and human wisdom kneels before a little child.
gazing in my mind's eye at the silent holy family, i learn anew the uselessness of too much talking, too much asserting, too much questioning. in the christmas miracle I learn to be patient, to be still, to wait upon the lord.  i share the serenity of the young mother mary, who "kept all these things, and pondered them in her heart" (Lk. 2:19).
-dennis rasmussen

may we all take this magic we feel, that comes undoubtedly from that babe of bethlehem, and keep it in our hearts all through 2012.