ten thoughts |40| : highlights from the usa 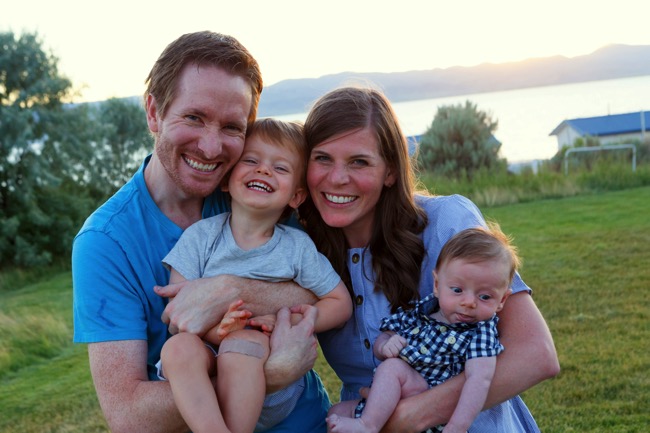 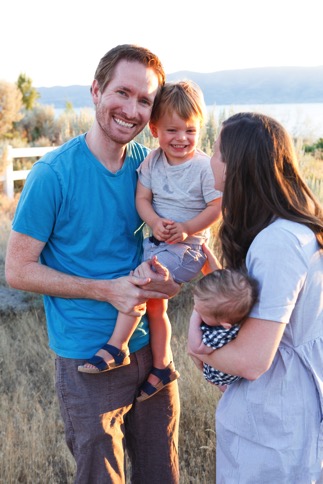 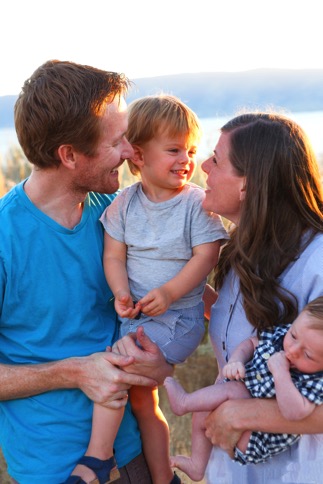 it's not a wednesday ... but today i wanted to share ten highlights from our trip to the states!
it was sooooo wonderful to be with family!

one.
definitely the very best part of our trip was seeing moses and gabriel with their cousins (and their grandparents and aunts and uncles, too!). both of our boys were so happy surrounded in cousins. the first thing mo would say every morning when we went to get him out of his crib was, "out! cousins!" he seriously had such a blast playing and laughing and learning with both eyre kids and wright kids. gabriel was constantly being held and was bursting with smiles and coos and wonder (his eyes get sooo wide!) as he interacted with family members. ahhhh this all made my heart so, so happy. 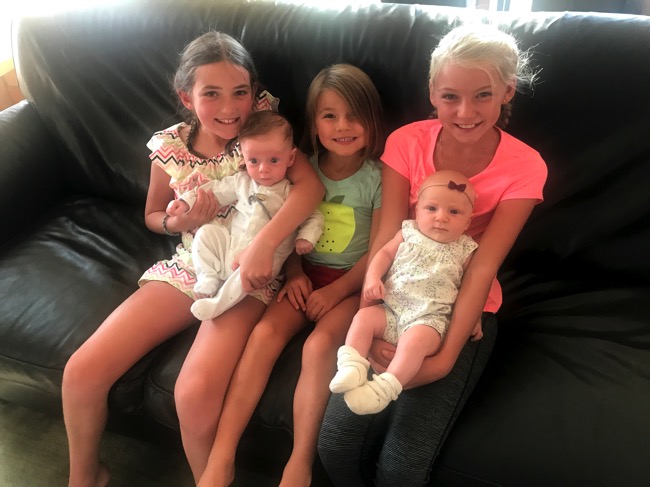 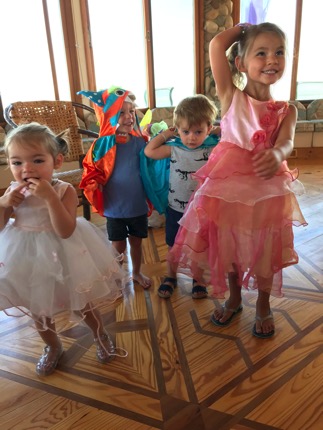 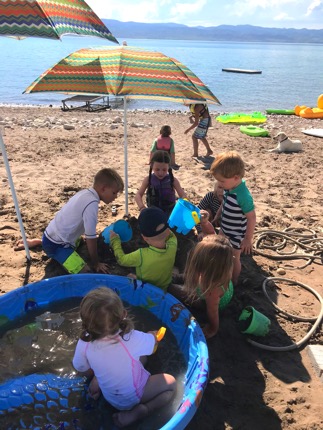 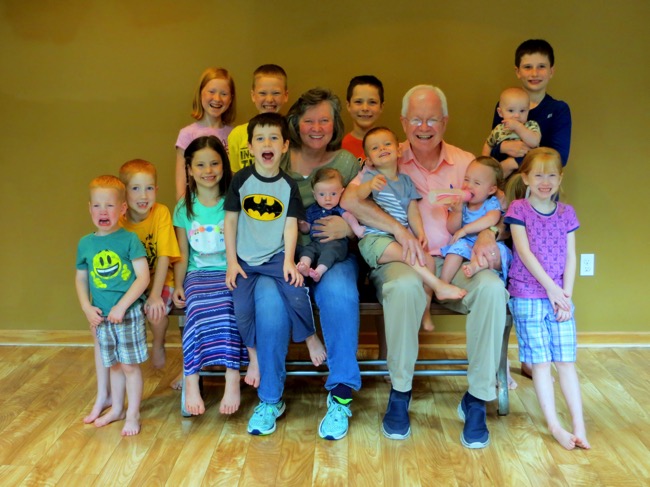 two.
we celebrated moses's second birthday just a couple of days after we arrived in utah from london. the night before his big day we slept at my sister saydi's house in salt lake city. jet lag woke mo up very early and i got him from his bed and brought him upstairs so ian and gabriel could sleep a bit longer. bleary-eyed, i cuddled my little boy on my sister's couch for a minute before it hit me that it was 9 july! i quietly said, "mo! what day is it?" he looked into my eyes and i could see the wheels turning in his head until it clicked. he whispered, reverently, "birthday!" i responded, "yes! whose birthday is it??" he put his hand over his heart and peered up with his huge blue eyes and said, with a sense of awe, "moses." i held him close and told him the story of the day he was born. he was still and fascinated. it was just such a tender slice of time - snuggling my baby, newly two years old.

three.
every year on the first night of our "eyrealm" reunion, we have a bonfire on the beach and share our favourite music discovered in the past twelve months ... and eventually there's always a pretty rocking dance party :) this year my heart was just brim with perfect joy as i sat under the stars, surrounded by my favourite people, with my feet in the sand. the gentle waves of the lake were lapping and beautiful music with moving messages filled the air and it just really was magical! it felt so so so good to be exactly where i was. i walked back to the cabin holding little gabriel and stopped halfway to look up at the night sky. there was no moon and the music was still playing as many family members were still gathered around the embers of the fire. the stars were spectacular and i just let the beauty of life wash over me as i offered a quick prayer of gratitude to heaven. 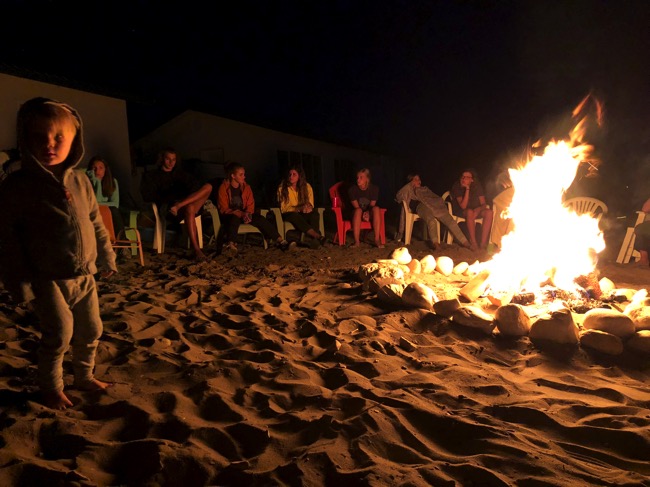 four.
it was thrilling to arrive both at bear lake and the house in the pocono mountains that my parents-in-law rented for the wright reunion! there was just so much excitement and love reverberating as the gathering of family members gradually happened. greeting each other with big hugs and smiles, introducing our baby to uncles and aunts and cousins that he hadn't yet met, seeing moses light up at the sight of people he adores but usually only sees on facetime... so so wonderful.

five.
my sister saydi and her family were in charge of the eyrealm reunion this year. and they went all out on the "opening ceremonies" the first night! at sunset, they unveiled the theme of the reunion - "turning the hearts" - with music, a big banner, the send off of dozens of heart shaped balloons, and ... fireworks! everyone was totally surprised and it was epic! (i may have teared up...) we focused on learning about and remembering my parent's parents at the reunion and it was really, really awesome. 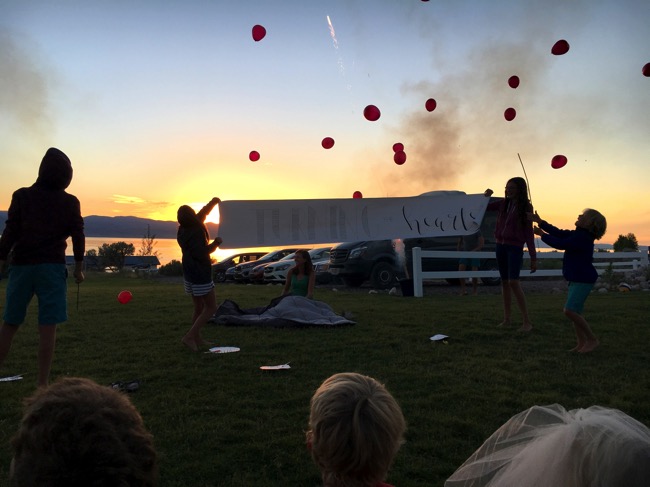 six.
our angel gabriel was blessed during the eyrealm reunion, just after his cousin (born five days before him!) was blessed! more on this super special event coming in a separate post...but definitely one of the biggest highlights of our usa trip for me was seeing my baby boy surrounded in so many incredible men who love him and are excellent examples for him. gabriel's blessing circle included his amazing daddy, both of his exceptional grandfathers, nine of his stellar uncles, and his awesome oldest cousin. blessed, indeed! 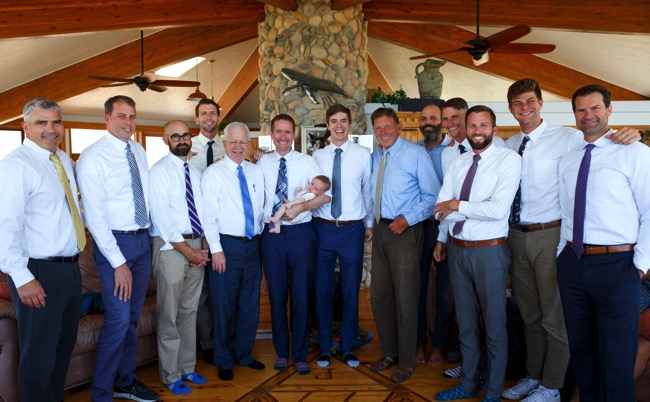 seven.
i'm convinced that there is nothing more exhilarating for me than waterskiing on the lush turquoise of bear lake. i got in two great skis this year (it's tricky to get time in behind the boat when there's fifty family members and only one boat!) and could hardly contain my euphoria! a big, rich storm was heading towards us in the sky during one of my skis - the colours were stunning and the air smelled of rain. it. was. fantastic.

eight.
i have a group of five nephews that are all around the same age and are thick as thieves. they call themselves "the bros" and come up with all kinds of cool stuff. they got really into sailing this year after grandfather taught them how to sail ... so they decided to advertise (with a pretty snazzy flyer) and offer a "romantic sunset sail" for couples at the reunion. ian and i, along with my brother noah and his wife kristi, were their first customers. the boys prepared us some dinner, brought it to the boat, set up the sails, and made a romantic music playlist. we set out on the water and the boys did all the work - grandfather was just there to supervise at the steering wheel. we were served a yummy dinner while the jazzy music played and the pretty sunset dazzled ... and then the boys gave us all shoulder massages! wow! this was ian and my last night at the lake and the perfect icing on our time in that beloved place. 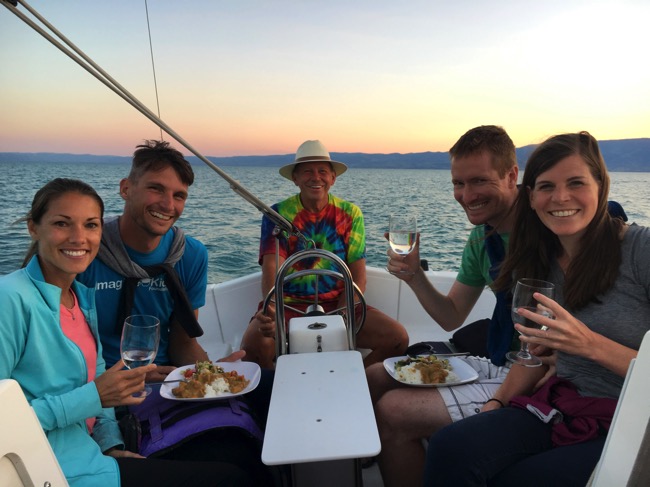 nine.
ian has one brother, nathan, who is working through a medical residency and whose schedule is very busy. he couldn't take any time off to come to the family reunion, and he was sorely missed. (his wife came on her own with their five children.) one morning we were all hanging out after breakfast and were shocked to see nathan outside on the deck! he had taken the three hour drive directly after a night shift at the hospital so that the entire family could be together for a few hours. it was such a great surprise! ian's parents were so happy to have all six of their children (and their spouses and kids!) together. 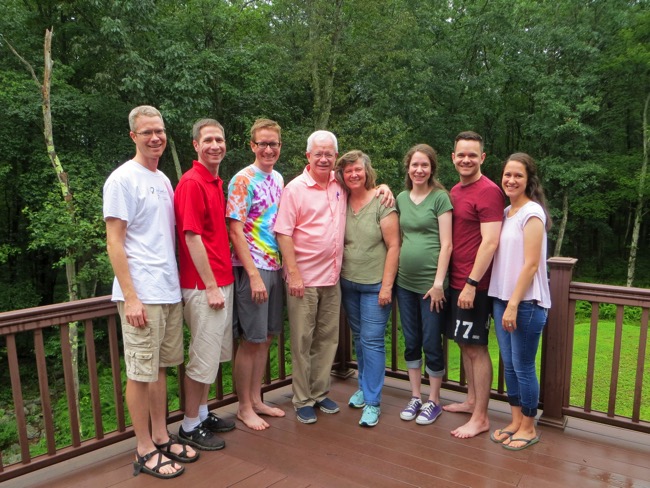 ten.
i mentioned this in my last post, but also had to include it in my highlights ... it was so special for me to be at my alma mater, wellesley college, with my babies. it was just a quick pit stop but provided such a peculiar and wonderful brand of joy. i sat on the steps of founders hall, where i attended many of my classes, and breastfed my newborn son while laughing with my toddler son and that just felt so great. i am so grateful for all i learned at wellesley and that both the professional and personal dreams i had there have come to fruition in so many ways. 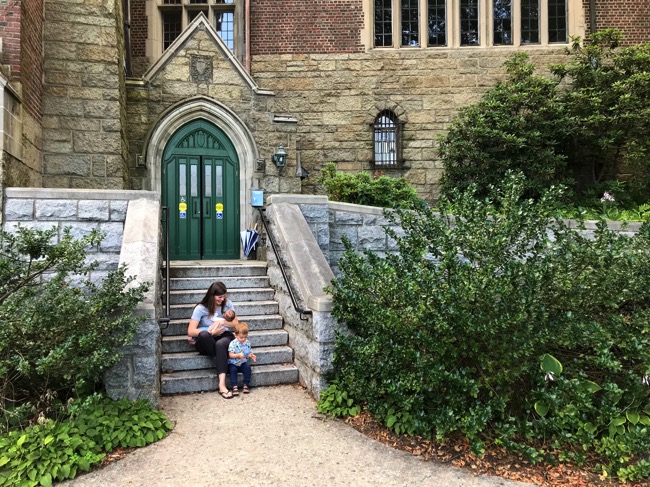 life is so, so beautiful! have a great weekend, friends! 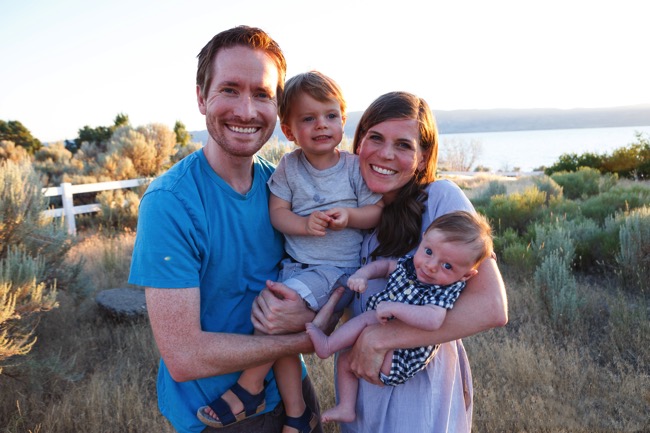